If You Can't Copyright a Film Title, Why Is WB Hassling Harvey Weinstein About "The Butler?"

A July 12th, 2013 article in indieWire does a great job of explaining how the major studios have gotten together to prevent members from marketing movies with similar names.

So why (legally how?) is Warner Brothers (makers of a 1916 short silent film called "The Butler") hassling The Weinstein Company (set to release their Lee Daniel's directed drama entitled "The Butler" on August 16th)?

As indieWire explains: "For signatories to the Motion Picture Association of America and those who voluntarily pay to be members of the MPAA's Title Registration Bureau (TRB), like the Weinstein Company (TWC), there are strict guidelines and procedures that films must follow with respect to their titles. But in the real legal world, there are no copyrights on titles."

So The Weinstein Company (to protect their own titles?) has previously agreed to abide by the rules of the MPAA's Title Arbitration process (a shadowy group of industry insiders who meet in secret and apparently have decided that a feature-length film starring Forest Whitaker could be confused with a 1916 out-of-print silent short).

But what if you're an indie film - and not a signatory to the MPAA's TRB?

You still can be hassled...  as attorney W. Wilder Knight explained to indieWire, "E&O insurers, which protect filmmakers from third party claims against them, usually require a title report. If the report shows any potential title conflicts, the E&O carrier will often suggest filmmakers change their title or seek permission to avoid any potential legal problems down the road. Even if a Hollywood major probably wouldn't win a case against a film with a similar title in a U.S. court of law, it can still sue—and no indie or insurer wants to pay for legal fees. "So it's not so much legal as financial," says Wilder."

There is precedent for such disputes - see the Groucho Marx letter below, written when Warner Brothers tried to stifle The Marx Brothers' use of "A Night in Casablanca" as a title because of possible confusion with the Humphrey Bogart movie they had made... 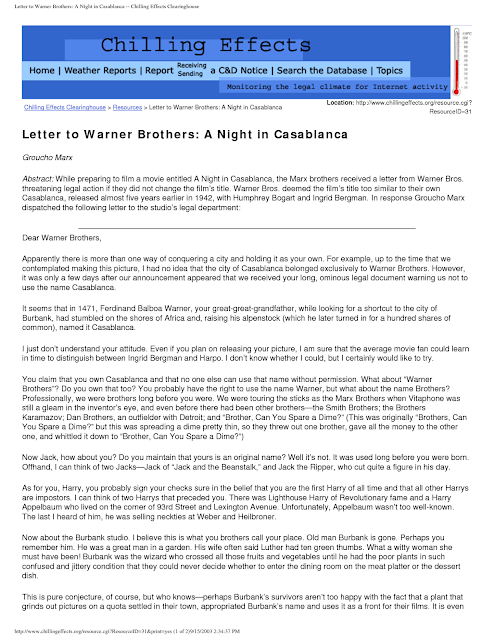