"In the West, plot is commonly thought to revolve around conflict: a confrontation between two or more elements, in which one ultimately dominates the other... [But for] countless centuries, Chinese and Japanese writers have used a plot structure that does not have conflict “built in”, so to speak. Rather, it relies on exposition and contrast to generate interest. This structure is known as kishōtenketsu." So begins a June 15th, 2012 Still Eating Oranges blogpost that contrasts conventional Western screenwriting wisdom with the structure of Chinese and Japanese narratives known as kishōtenketsu.

Unlike the three act structure of most Hollywood screenwriting, the kishōtenketsu model of narrative structure consists of four basic stages: Introduction, Development, Twist, and Conclusion (sometimes described as Setup, Expansion, Contrast, and Resultant). 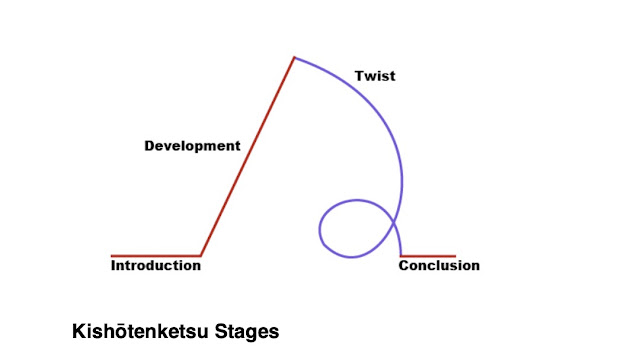 Stories using the kishōtenketsu structure often contrast seemingly disconnected events. Or sometimes the contrast between the Setup and the Twist is achieved by re-evalauating the same events from a different point of view.

Usually the basics of a kishōtenketsu story ( e.g., characters, setting, problem, etc.) are established in the first stage and developed in the second stage - but then, in the third stage, a new element is introduced. According to Still Eating Oranges, "The third act is the core of the plot, and it may be thought of as a kind of structural non sequitur. The fourth act draws a conclusion from the contrast between the first two “straight” acts and the disconnected third, thereby reconciling them into a coherent whole." In other words, in the kishōtenketsu model, the synthesis in the conclusion may not come from a struggle with an antagonist - it may be as simple as a transformation based on an insight gleaned from an unexpected development in the third stage.

The distinction in structure between the kishōtenketsu and films built on a three act frame may not seem very pronounced to someone who's seen a great many Hollywood movies. Even in situations where another tool was used (e.g., the 1950 Kurosawa classic Rashomon is a film that was constructed using the kishōtenketsu model), committed Hollywood movie fans, Hollywood screenwriters and the teachers of Hollywood screenwriting may discern an antagonistic conflict as the driving force in almost any motion picture (e.g., a Western synopsis might describe Rashomon as what happens when a samurai and his wife are attacked by a notorious bandit). Why? Perhaps because "to a man with a hammer, every problem looks like a nail."

If you're having trouble imagining how your screenwriting might be enhanced by using the kishōtenketsu model (as opposed to the traditional protagonist / antagonist structure of most Hollywood screenplays), think about how surprise - instead of anticipation - can be used to build tension.

For example, think about the HBO series Game of Thrones. While each episode of Game of Thrones is full of traditional conflicts, the screenwriting is unique because of the rapid movement between divergent points of view and the unexpected developments that compel a new synthesis. Consider the twist that befell Tyrion Lannister (Peter Dinklage) after he courageously engaged the forces of Stannis Baratheon (Stephen Dillane) that were attacking King's Landing in season 2. Or consider how the surprising deaths of certain characters (e.g., a hunting accident, a surprising execution, etc.) in season 1 compelled the characters in the story (and some frustrated devoted fans) to experience a new synthesis. HBO programming president Sue Naegle spoke to the role of surprise in Game of Thrones in a June 11th, 2011 Entertainment Weekly interview: “The book series was filled with unexpected twists and turns. I loved this idea we’d bring together the group of characters, then once you started to believe all the tropes of heroes, you pull the rug out from under them. It’s the opposite of feeling manipulated.”

It would be wrong to suggest that Game of Thrones lacks traditional Hollywood conflict. Or that the storytelling of the problems of the Starks and Lannisters are the best evidence of kishōtenketsu. But perhaps one reason that the storytelling of Game of Thrones feels so fresh is the way that unexpected (and, in every sense of the word, unconventional) events spin the narrative in new directions. The success of Game of Thrones - based in part on surprising developments that propel the story into unexpected new places and the shifts between various points of view - is something other Hollywood screenwriters might emulate if they want to refresh the violent-struggle-between-protagonist-and-antagonist formula.

Still Eating Oranges observes: "The necessity of conflict is preached as a kind of dogma by contemporary writers’ workshops and Internet “guides” to writing. A plot without conflict is considered dull; some even go so far as to call it impossible."

But isn't it formulaic plotting - with one protagonist who will confront and defeat one antagonist within the allotted time - that makes so many Hollywood films feel dull?

According to Still Eating Oranges: "Kishōtenketsu has been shown to generate plot without [a confrontation between two or more elements, in which one ultimately dominates the other] conflict, which reveals as insular nonsense the West’s belief that they are inseparable... It offers writers the opportunity to explore plots with minimal or no [Hollywood style] conflict."

Thanks to Jeff Gomez, Brian Clark and Hank Blumenthal for sharing the Still Eating Oranges link that inspired this post.

The clip at the beginning of this post is from the 2002 film Adaptation that was directed by Spike Jonze from a Charlie Kaufman screenplay (based on Susan Orlean's non-fiction book The Orchid Thief). The excerpted scene satirizes the screenwriting certitude of Hollywood screenwriting teacher Robert McKee (e.g., McKee famously insists that all scripts must be organized: Goal/Want - Obstacle/Forces of Antagonism - Solution).
Posted by Randy Finch on Sunday, July 01, 2012

Diagram is wrong on kishotenketsu. I checked with ownvoices, and then corrected it for wikipedia by redrawing the diagram. The HIGH point is the twist. The Y access is Emotion. And then the X-axis is divided by the time the story takes up, rather than the timeline of the story itself.