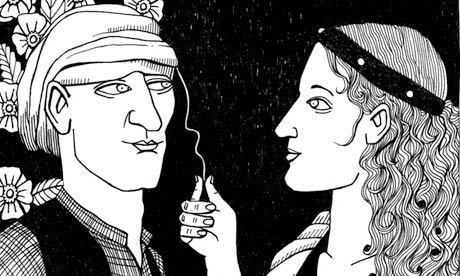 A March 5th, 2012 article in The Guardian tells the fascinating story of how 500 fairytales, many of which have never appeared in other European fairytale collections, have recently been rediscovered by an intrepid curator.

Before Erika Eichenseer stumbled across the trove of unpublished stories, they had been locked away in an archive in Regensburg, Germany for over 150 years. They were originally collected by Franz Xaver von Schönwerth (1810–1886) - working at roughly the same time as the Grimm Brothers. Unlike the Brothers Grimm, von Schönwerth apparently made no effort to put a literary gloss on the folktales and stories he collected: According to Erika Eichenseer, "There is no romanticising or attempt by Schönwerth to interpret or develop his own style."

What's in the collection? Hundreds of stories, many of which are intended "to help young adults on their path to adulthood, showing them that dangers and challenges can be overcome through virtue, prudence and courage." For example,"there is the tale of a maiden who escapes a witch by transforming herself into a pond. The witch then lies on her stomach and drinks all the water, swallowing the young girl, who uses a knife to cut her way out of the witch."

Thanks to Alan Mehanna for the link.
Posted by Randy Finch on Tuesday, March 13, 2012