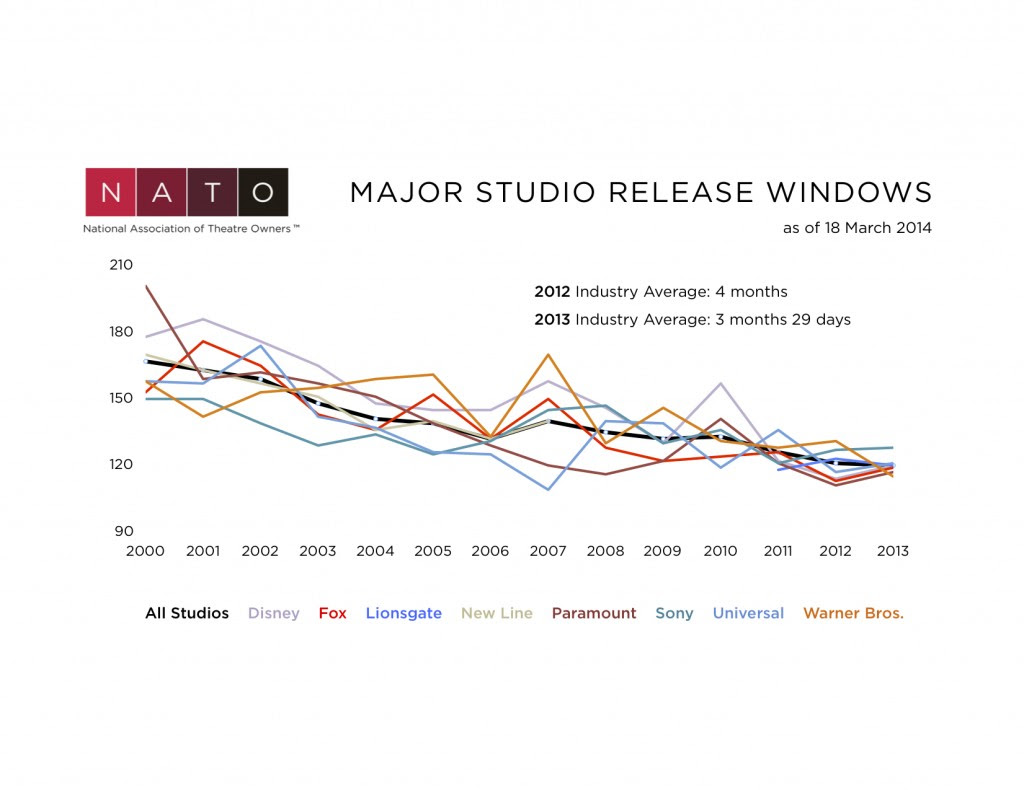 At the Consumer Electronics Show during the second week of January 2012, Warner Brothers will announce that they are stretching the DVD new release window from 28 to 56 days.

What is the "DVD new release window?"

Currently Warner Brothers, Universal and Fox reserve a 28-day "window" in which they sell DVDs to consumers - but don't allow companies (like Netflix and Redbox) to rent them out. Sony Pictures makes Netflix wait 28 days for its hits but allows Redbox and Blockbuster to release them sooner. Only Paramount and Disney currently allow Redbox and Netflix to offer DVDs for rental the same day they go on sale - without a DVD new release window - although Disney does charge the rental companies more for new releases.

Now the established DVD rental services will be faced with a choice: Wait the full 8 weeks to buy their DVDs at a discounted price from the studio - or purchase DVDs on the retail market (like you or I will able to) and offer them to their rental customers 8 weeks before anyone else. The latter course will cost the rental services more money and it will certainly create tension between Warners and the impatient rental service.

In a Jan. 6th, 2012 gigaom post Ryan Lawler predicts that Netflix will abide by Warner Brother's new rules - but Redbox may not - and Blockbuster almost certainly will not.

Unlike Netflix, where DVDs are a declining part of the business model (Netflix is focused on making streaming deals for new content while continuing to offer DVDs for older titles as a legacy business) - Redbox has built their business on impulse rentals of the latest hits. Apparently getting a DVD as soon as possible after it hits the theaters really matters to Redbox customers.

According to Mr. Lawler's reporting, the current DVD purchase deal that Redbox has with Warner Brothers (with the 28 day hold back) expires at the end of January 2012: "When it’s over, you can expect the company to find alternative sources for Warner Bros. DVDs. It might pay a little bit more for each title, but it’s likely to make up that cost in the eight weeks that its users would have to wait for those movies to hit its kiosks. As a result, the new Warner Bros. window could actually end up being a net positive for the kiosk rental firm."

As for Blockbuster? With a declining market share, Blockbuster has already been going to sources other than the studios for their DVDs and using the availability for rental on the same day that a video becomes available on DVD (what is know in the film business as “day and date”) as a unique selling point in its marketing. In other words, to distinguish itself from Netflix and Redbox, Blockbuster has already been ignoring the 28 day windowing deal that the studios tried to impose on DVD rental services. Now that Warner Brothers wants to extend the exclusive sale window to 56 days, the day and date policy of Blockbuster is (in Mr. Lawler's words) "unlikely to change."

So Warner Brothers has decided to extend the DVD sales window (the time before DVDs become available for rental), in an effort to make some more money from retail DVD sales. What about the other studios? Even though anti-trust law prevents the studios from openly colluding to set prices or DVD sales policies... I expect some of the other studios (Universal?) will follow Warner's lead and extend the exclusive sale window for DVDs to 56 days.
Posted by Randy Finch on Saturday, January 07, 2012