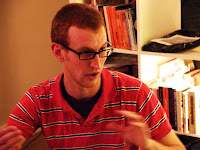 James Fair is a filmmaker who teaches in an innovative film program at Staffordshire University, UK. He is also about to make, edit and screen a feature length film in 72 hours at the 2010 Melbourne (Australia) International Film Festival. This 72 hour film project isn't just a stunt. In Melbourne James will be testing the limits of how crews are structured and what they can achieve when time and other resources are tight. In addition to pushing the boundaries of the process, James is also thinking and writing eloquently about how the filmmaking paradigm can and is changing. I'm delighted that James Fair has agreed to guest post here. He calls this post: "Mind Your Language."

Last week I wrote a guest post for Ted Hope’s Truly Free Film blog and called it "Linearity is the Enemy." The title was deliberately exaggerated to conjure up a militaristic image for the reader, and a few indicated that they enjoyed it. I want to explore why such language is not unusual in filmmaking and examine whether this terminology can sometimes set us at a disadvantage when making films.

Let’s start with the fundamentals of filmmaking. Why do we ‘shoot’ a movie? Why is it made up of ‘shots’? It’s just a way to describe the capture of images, right? But there it is again! CAPTURE. The core terminology at the root of the filmmaking production process is militaristic, and we rarely question it. The grand prize in filmmaking, the signal of industry success, is to shoot a ‘blockbuster’. This was a term that originally described the World War Two bombs that could take out a whole block!

As I have largely developed my career outside of the conventional industry route I get labelled a ‘guerilla’ filmmaker. But I am not the greatest threat to the film industry; that would be the ‘pirates’. These terms are what I consider to be ‘outsider’ terminology and suggest that any position outside of industry must be ideologically opposed to it. It is a frustrating problem, because reality may not be any further from the truth, as many filmmakers are actually struggling desperately to become a part of industry. The language that we pride ourselves on takes this perceived division of ideologies further, and although it does not remain militaristic, it certainly emphasises the separation. ‘Do-it-yourself’ filmmakers from ‘independent’ companies immediately distinguish the ideology in the language. We’re desperate to be different!

Why does any of this matter? Am I just being semantic? Marshall McLuhan argued in The Medium is the Massage that our language indicated how sight can be considered the primary, most valuable and trustworthy sense over all others. We WATCH teleVISION, we go to SEE a film. To manage is to OVERSEE and to lead others is VISIONARY. ‘I’ll believe it when I see it’, ‘don’t worry about that, I’ll see to it’. By contrast our hearing is uncertain – ‘I heard it on the grapevine’, ‘somebody told me’. The language we adopt gives away our position about how we feel about it.

My belief is that if we expand this further, towards the militaristic and separatist language that I have outlined above, it indicates how we really feel about it. Furthermore, I think we revel in it and use it effectively. I have often tried to inspire a crew by exaggerating the underdog culture. The ‘us & them’ distinction is valuable. But it is also destructive, and can be difficult to come back from.

I have recently arrived in Australia to shoot, edit and screen a feature length movie called ‘The Ballad of Des & Mo’ in three days as part of the Melbourne International Film Festival. I am tremendously nervous and excited by the privilege. The 72 Hour Movie project is designed to show how we can rethink the production process and collectively engage a filmmaking community and audience to produce something that inspires and empowers us all. The process is valued as highly as the product.

However, the language that is usually designated to ‘independent’, ‘do-it-yourself’ filmmakers is contradictory to the ‘collective’ and the ‘community’. The ‘punk’ approach to cinema hints at rejection not inclusivity. The very terms that we use to describe ourselves has meant that we are misrepresented and starting at a disadvantage. I constantly find myself having to correct assumptions that are created around our project, just because a different meaning is implicit in the language.

What is my point? I want us to go back and think really deeply about our position. What are the roots of our filmmaking culture and why are they there? Is everything necessary and is everything helpful? Are the terms we are adopting so unquestionably really appropriate? My reasoning is simple. With the words comes an implicated hidden meaning, and sometimes the words we use contradict what we mean. I am an independent filmmaker, but I don’t want to be alone. I want to be with my audience. Not in the way that audience has come to mean people who consume or encounter something, but in the way that they participate and engage too.

This is just food for your thought. Enough of the talking, we have a movie to make!

James Fair will lead a team of filmmakers shooting, editing and then screening a FEATURE LENGTH MOVIE in three days (www.72hourmovie.com) at the Melbourne International Film Festival in August 2010. He is also the Award Leader of the MSc Digital Feature Film Production at Staffordshire University, UK.
Posted by Randy Finch on Saturday, July 03, 2010