A Rebuilding Phase for Independent Film? 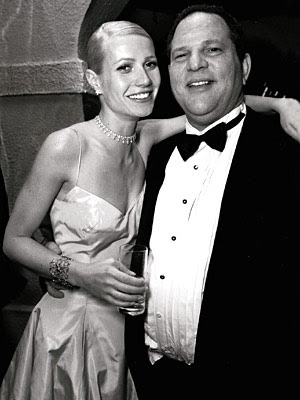 On April 25th, 2010 the NY Times interviewed Harvey Weinstein (pictured above with Gwyneth Paltrow's skeleton) and a number of other players in the old world of independent film distribution whose businesses have collapsed. Without providing any facts or figures, the article serves primarily as a platform for these formerly successful players to talk about how they plan to come back "smarter." This kind of usual sources "reporting" (which comes out just in time to publicize the increasingly corporate Tribeca Film Festival which opened with the 3D Shrek sequel) wants desperately to be authoritative, but fails to question whether high-priced/low-paying distribution companies and the aging moguls who used to run them are still relevant. You'd think, with all the filmmakers with real indie credits in NY, that the NY Times could have found a more credible face for the future of indie film than Sri Rao, a Darren Star wannabe, whose most significant "filmmaking" credential is a stint as the head writer of General Hospital Night Shift.
Posted by Randy Finch on Monday, April 26, 2010