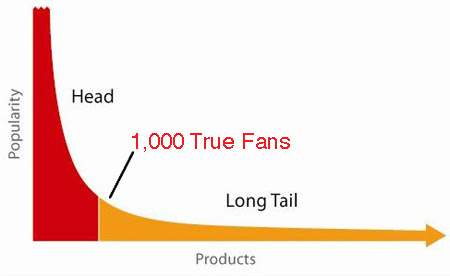 For microbudget filmmakers (and other artists) to support themselves in this new age of digital distribution, Wired contributor Kevin Kelly suggests that you only need to connect with your True Fans directly.

In a very provocative essay, Kevin Kelly says all you need to do is to convert 1,000 Lesser Fans into 1,000 True Fans and you can support yourself as a digital filmmaker.

Kelly's argument builds upon the now widely accepted fact that the digital age has created a new economy of distribution commonly known as the Long Tail.

The Long Tail (see Chris Anderson's groundbreaking article here) illustrates how aggregators of content (like Amazon.com and Netflix) are making real money from the ouput of thousands of separate artists.

One rarely discussed outcome of this new economic reality is that the great majority of artists (e.g., all the indie filmmakers on the thin part of the Long Tail) are only receiving a very small amount of money each.

Kevin Kelly's 1,000 True Fans article starts with this reality, but goes on to identify the place on the Long Tail curve where independent filmmakers (and other artists) can support themselves. Kelly points out that, even without a theatrical release or selling millions of copies of your work, if you can sell more than most other filmmakers, you may be able to support yourself with 1,000 true fans.

Kevin Kelly's math may not work exactly as he describes, but there is a fundamental reality behind his argument: Indie filmmakers can profitably self-distribute if there are enough buyers and the production and distribution costs are kept low.

Kevin Kelly starts with the assumption that your True Fans will each spend one day’s wages per year to support what you do. For Kelly, this “one-day-wage” figure is an average, because according to Kelly your truest fans might spend even more. Kelly pegs the amount that each True Fan will spend at $100 per year. Using Kelly's math, if you have 1,000 fans that equals $100,000 per year, which minus some modest expenses, is a living for most folks.

There are obvious flaws with Kelly's numbers for indie filmmakers. For example, if it costs $100,000 to produce and distribute your movie, 1,000 True Fans at $100 each means you only just pay back your investors. There is no money left for you to live on. Another flaw in Kelly's math is the assumption that a True Fan will spend $100 per year for your work. How many artists do you regularly spend $100 on? Do you plan to spend that $100 every year indefinitely?

Nevertheless, Kevin Kelly has made a provocative contribution to the ongoing dialogue about self-distribution in the new digital age.
Posted by Randy Finch on Saturday, January 24, 2009