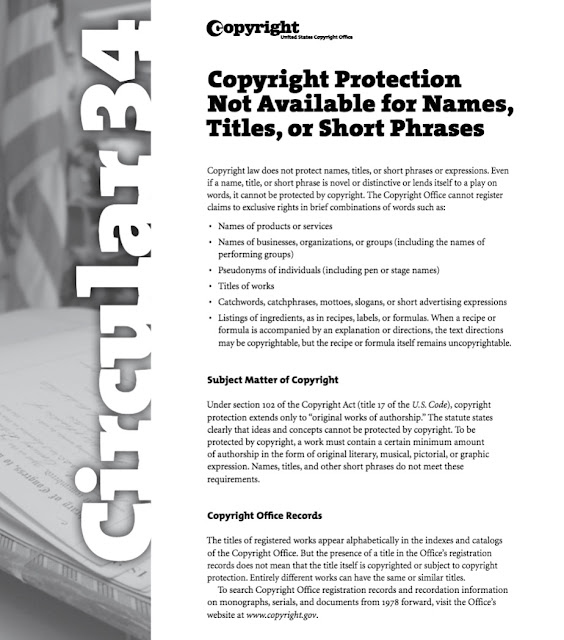 In a document known as Circular 34 the US Copyright Office explains that movie titles, catchphrases (i.e., a well-known sentence or phrase, typically one that is associated with a particular famous person), names of people, products, and services are NOT subject to copyright.
Why aren't these short forms of expression (in particular, this post is concerned with movie titles) copyrightable?

Where the degree of creativity is minimal, the US system is reluctant to allocate court time and government resources to protecting plaintiffs under copyright law.

These requirements - of originality and authorship - also explain why judges will toss out copyright cases where a mere listing of ingredients or facts (e.g., a recipe or a telephone directory white pages) are lacking in creativity.

There is a grey area (isn't there always?), where a minimum amount of original expression might exist and copyright protection could attach to a very short work (e.g., a music sample). But, in general, movie titles and short phrases are not protected by copyright law.

But note: Short movie titles and short phrases can sometimes be protected under trademark law.

In general, trademark protects names, words, phrases and symbols which identify the source of goods or services in commerce.

But not all titles, logos and phrases can be trademarked.

Basically, protecting a title or phrase under trademark requires that the title, logo or phrase is a brand - in other words, an identifier used on goods or services offered for sale in the marketplace.

Note: Even though trademarks serve the public interest by protecting consumers, trademarks also benefit producers. For example? George Lucas was able to  sell the Star Wars brand to Disney in 2012 because "Star Wars" signifies a source of goods in the minds of the public. In theory, legally licensed Star Wars toys, etc. should be of a certain quality - thereby protecting the consumer and the owner of the Star Wars brand from unlicensed works. (Although there are some unlicensed Star Wars toys that are simply amazing.)

In the US, registration of movie titles as trademarks with the United States Patent and Trademark Office generally requires that the work designated by the title is not a single film, television show, or book. The one possible exception: When the single movie's title has had such an impact that the title has acquired what lawyers call secondary meaning. And "[t]he crux of the secondary meaning doctrine is that the mark comes to identify not only the goods but the source of those goods. To establish secondary meaning, it must be shown that the primary significance of the term in the minds of the consuming public is not the product but the producer."

The Motion Picture Association of America or MPAA (a not-for-profit private lobbying group, funded in large part by the 6 major studios) offers a non-governmental system - specific to the motion picture industry - for registering movie titles.

This voluntary registration for titles of movies is intended to prevent public confusion over films with similar titles. And the MPAA system does not rely copyright or trademark protection. Instead, it operates under contract law.

In order to register titles, filmmakers must subscribe to the Bureau’s registry. There are currently almost 400 subscribers, including all of the major motion picture studios.

Subscribers to the MPAA title registry are bound by the MPAA's rules, which set out how to register titles and - most importantly - how to handle disputes between subscribers about previously registered movie titles.

Note: The MPAA system of title registration has nothing to do with copyright or trademark law. The title rules of the MPAA are enforced by contract (when you sign up, you agree to follow the rules, and if you don't follow the agreement, you can be sued for breach of contract).

Is there a recent example of the MPAA’s Title Registration Bureau leaping into action?

Yes. The MPAA system of title registration explains why in July of 2013, the MPAA’s Title Registration Bureau ruled that The Weinstein Company (TWC) could not use the title "The Butler" for their Lee Daniels film. "The Butler' was the name of a preexisting 1916 short film that had become part of the Warner Brothers library. So instead TWC called their film “Lee Daniels’ The Butler”: