On Defining Culture: How Prof. Jon Taplin Took a Shortcut and Crashed His Anti-Pop Culture Argument 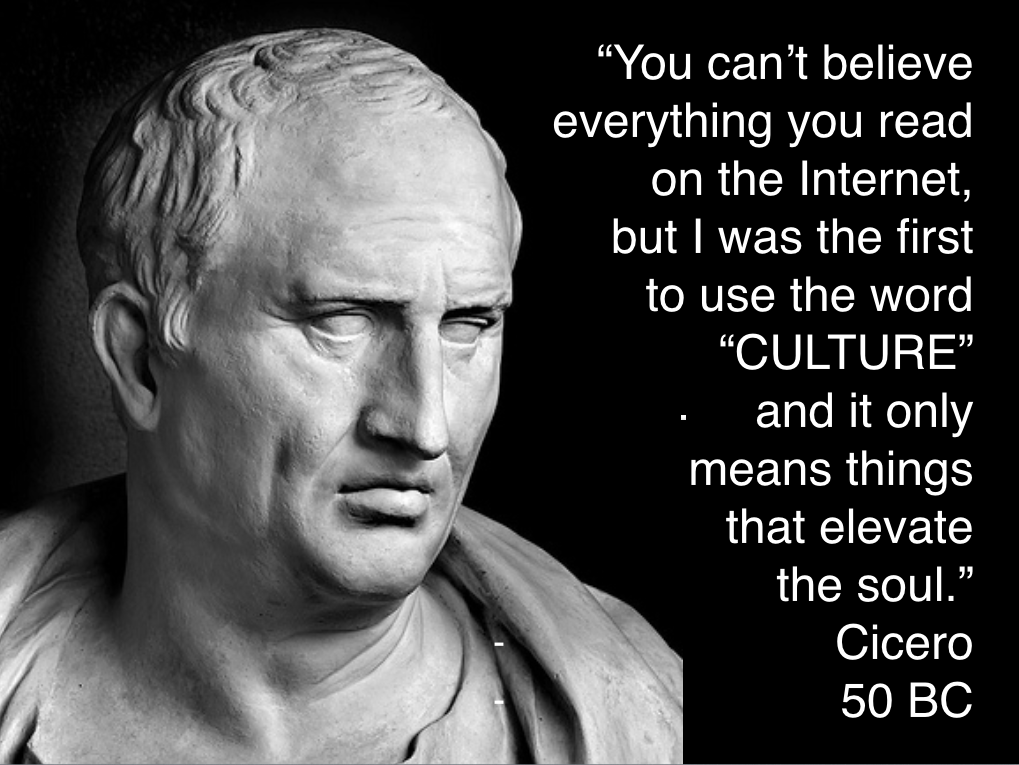 Are Vine videos a part of "culture?"

And Prof. Taplin seems to think that an ancient Roman orator, Cicero (an unlikely ally?), would agree with him.

Basically the Prof. isn't buying what "celebrants of contemporary pop culture" are selling - and he is growing weary of defending his “get off my lawn” views.

In his own words, he's "tired of having to defend my right to say that Julia Kelly [who describes herself as a Vine actress] is not an artist and Pawn Stars is not culture."

The Prof. just knows “the difference between the real deal and the second rate” and he dismisses charges of snobbery just as he dismisses a long list of various forms of popular expression.

Prof. Taplin concludes his Sept. 22nd, 2014 post with a flourish, claiming there is support for his exclusionary view of culture in “the first use of the word “culture” by the Roman orator Cicero, he meant it to be “cultura animi” (cultivation of the soul).”

Inconveniently for Prof. Taplin, that’s not exactly what Cicero wrote.

Which I'm told translates roughly as “philosophy is the culture of the soul.”

What does this mean? And why does it matter?

If you actually read the relevant passage, Cicero was arguing that an understanding of philosophy and the great thinkers is necessary in order to cultivate the MIND and SOUL: “As a field, though fertile, cannot yield a harvest without cultivation, no more can the mind without learning.”

Prof. Taplin seems to think that Cicero was talking about "culture" as only those things that edify the soul.

If you actually read Cicero, that's not it at all.

Cicero was comparing minds and souls to plots of dirt - all are places that need to be cultivated for new things to grow.

Does it really matter that Prof. Taplin misunderstands the relevant part of Cicero’s Tusculan Disputations (Book 2 - On Bearing Pain, V. §13)?

Even if the original text does NOT have Cicero defining culture exclusively as the things that cultivate the soul, instead making the point that a knowledge of philosophy is necessary for many new things (culture?) to grow, who cares?

Is it just my need to engage in a cheap game of academic gotcha to point out Prof. Taplin's Cicero boo-boo (not the Honey Boo-Boo that Prof. Taplin uses to bash all pop culture – but his own scholarly screw-up)?

It isn't just that Prof. Taplin, who regularly decries the dumbing down of contemporary pop culture, has misquoted Cicero (relying on Wikipedia?) to support his refrigerator magnet’s worth of bogus insight.

A part of what bothers me is that Prof. Taplin’s ersatz version of Cicero will now live on as part of the same online stew that he decries - an ever-growing bubbling cauldron that includes misquotes of Thomas Jefferson, as well as countless Vine videos, sightings of Slender Man and Grumpy Cat.

But what really bothers me is that Prof. Taplin, the head of USC's Innovation Lab, rarely ever spends any time any more online acknowledging all the amazing opportunities in our newly-connected world.

Even if he hasn't read Cicero in the original, does the Prof. appreciate that access to Cicero's actual greatest works (and Thomas Jefferson's, and all the other great thinkers of history) is now just a few clicks away?

For millions of people around the world, many whose families never owned a book - but are now getting a smartphone or tablet, the Prof.'s dismissal of popular culture seems oddly misplaced.

Yes, much of the web sucks.

(In truth, it troubles me that the Prof., who is so is quick to dismiss the internet as a wasteland of "meaningless" content, has twisted Cicero's meaning on its head - and that laziness will live on forever online.)

But what really troubles me is how rarely the Prof. thinks to acknowledge the amazing potential of the new tools for cultivating billions of minds and souls around the world.

In other words, it isn't really Prof. Taplin's questionable scholarship.

It isn't even the stupid idea that Cicero, writing before the birth of Christ, intended to set out an immutable definition of culture – forever requiring the word culture to attach only to those things that elevate the soul.

What bugs me the most is Prof. Taplin's grumpy (and recently all-but complete) blindness to the good that the web is doing.

Has Prof. Taplin actually considered the words of Cicero: "As a field, though fertile, cannot yield a harvest without cultivation, no more can the mind without learning."

Isn't the opportunity to teach (and to learn) at this unique moment a great gift?

Reading Prof. Taplin these days, it's easy to believe that everything good has already happened - and finding any virtue in all this new stuff is just too much work. The web gives him a headache.

Yes, misquoting a long-dead Roman for the proposition that culture must only be about elevating the soul is dumb.

But what is inexcusable is becoming an angry scold - focussing only on the problems - while the online information explosion is contributing to the most rapid reinvention of culture in the history of the world. 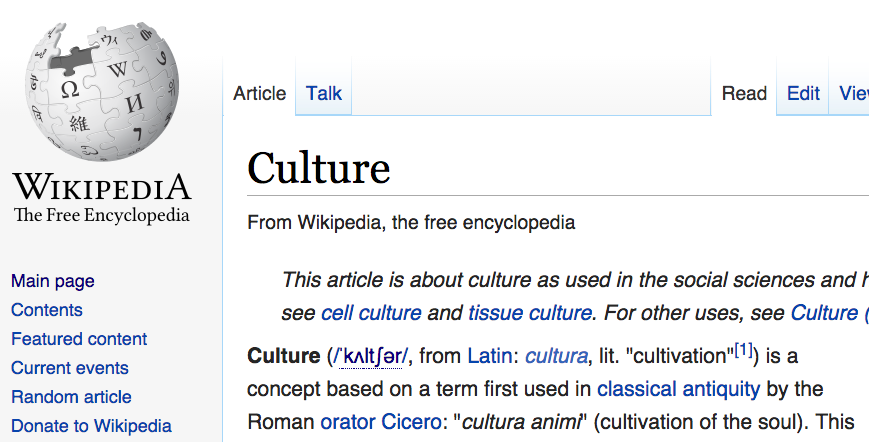