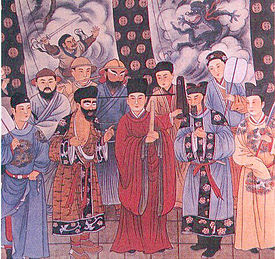 Complaints about the way musicians and filmmakers are getting screwed in the age of the internet (complaints mostly coming from people who prospered under the old paradigm) continue. See the following conversation where Professor Henry Jenkins talks with 12-time Grammy-winning composer and producer T Bone Burnett (T Bone Burnett is a vocal critic of the new ways, frequently making the case against so called "Internet Freedom"):

T Bone Burnett makes wonderful music. And he is clearly right on certain points: Something is being lost in the transition to a new paradigm for how popular music and film circulates and is monetized. But I'm not sure that Mr. Burnett understands (gives proper weight to?) how culture has historically moved forward. Specifically, change happens in pop culture often in reaction to an old system - and sometimes the old culture suffers in the transition.

Here's what I want to say in response to Mr. Burnett's hagiographic account that conflates rock and roll individualism (Bruce Springsteen  = Johnny Appleseed) with the corporate system that profited mightily from the sale of physical copies (15 private airplanes at one record company): While it's important to preserve what we love about the past, isn't it also important to welcome new paradigms, especially those that might be more inclusive and representative of the great majority of users?

Mr. Burnett's arguments might be more persuasive if there were NO precedents whatsoever for a flowering of popular music and drama even after an old paradigm for compensating artists had been shattered...

But that just isn't how it works...

For example, students of Chinese history may remember that in the late 13th century new forms of music and drama arose precisely because the established order was overthrown.

In 1271, invader Kublai Khan's Mongol control of China was formalized when he changed the name of his empire to the Sinicized Yuan Dynasty.

As Marco Polo wrote - Kublai Khan made his Mongol empire capital in what would become modern Beijing - and he promptly set about remaking Chinese culture in his own manner.

For example, under Kublai Khan, the Chinese imperial examination system was abandoned. And, to protect Mongol supremacy, the Chinese scholarly gentry were pushed aside - impoverishing many leading Chinese artists who had once profited handsomely from their government stipends.

As Robert Guisepi explains: "[T]raditional Chinese artistic endeavors, such as poetry and essay writing, languished under the Mongols in comparison with their flowering in the Tang-Song eras, [but] popular entertainments, particularly musical dramas, flourished."

In other words, by lowering the status of Chinese intellectuals in favor of a Mongol upper crust, Kublai Khan's rule had an effect similar to what the internet is doing to established filmmakers and recording artists. The figures who had risen to prominence in the old days by practicing the traditional artistic endeavors suffered. But the practitioners of new popular entertainments rose up to take their place.

And it was possible for some of the displaced artists from the old regime to reinvent themselves as New World leaders.

As today's Chinese Ministry of Culture explains: "[In the 13th Century, t]he Yuan rulers abolished the imperial examination system, lowering the status of intellectuals to a position only a little higher than that of beggars. Such scholars found an outlet for their talents as professional playwrights. They set up an organization called the Scholars Association, which was one of the cradles of play writing, giving rise to the Yuan golden age of Chinese theater in contrast to lyric poetry, which mainly expressed the subjective feelings of the poets, the Yuan Zaju gave wide publicity to social problems. This was because the playwrights themselves lived among the people."

So even though a personal form of expression that had been sanctioned and supported by the ruling elite collapsed due to a new system, it actually lead to the flowering of new forms of expression, that reflected a more populist form of storytelling - leading to a renaissance of Chinese theater and music...

There are lots of reasons to discount the relevance of this episode from the 13th century to today's world. But I find it fascinating that art "about real life and the tribulations of the ordinary people" arose over 700 years ago to replace an elitist system that had been sustained by artificial incentives from powerful gatekeepers.

Could a 21st century Musicians and Filmmakers Association - made up of artists who lived among the people (including new YouTube stars and forward-looking artists who won fame in the Old World, but lost the benefits of their big label/studio deals as the internet undermined old revenue streams) - figure out ways to prosper online?

Would T Bone Burnett support such an effort?
Posted by Randy Finch on Friday, December 27, 2013