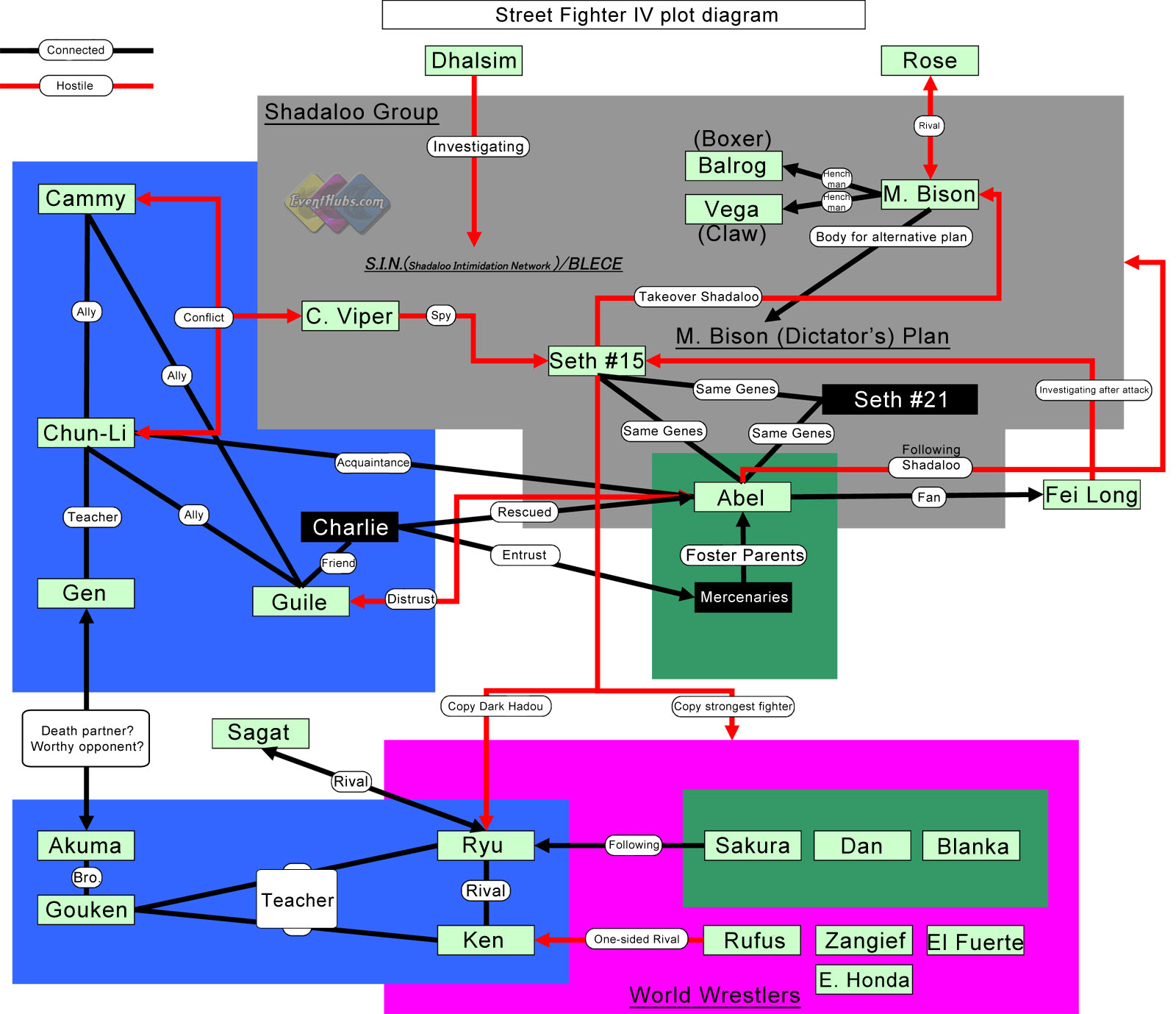 Although I'm not a hardcore gamer, I find myself fascinated by the argument about game structure made in a September 8th, 2013 post by Julius Kuschke.

In particular, what Julius Kuschke has to say about working on the structure of video game narratives reminds me of what I've been telling my screenplay development students - in a discussion of how TV series like House of Cards and Breaking Bad are structured - just this week.

The problem with many video games (see the wildly convoluted diagram from Street Fighter above)?

Mr. Kuschke quotes veteran game designer Warren Spector: "The part of the story where, having established the hero’s problem and gotten him up a tree you throw narrative rocks at the poor schmo? That part, we’re not so good at."

Why do so many games get boring after a couple hours of repetitive play?

According to Julius Kuschke, without the narrative momentum of a good film or episodes of a great TV serial, the long hours in the middle of a game can drag: "I get so bored by games like Assassin’s Creed – that stretch their narrative over dozens of hours without letting the plot make relevant progress – that I did not finish any of the series’ last installments."

So what's the solution?

Is there a structure for games that might make playing them - especially after a strong opening cut scene - a more enjoyable experience?

The answer that Julius Kuschke suggests is remarkably similar to the advice I've been giving my screenplay development students about the structure of episodic television. In particular, my students and I have been talking about how serials differ from procedurals (like CSI or House). And more specifically, we've talked about how, in a season of a television serial, there is usually a season long goal as well as elements that hold each episode together as its own satisfying entity.

But the best television writers are currently creating discrete episode arcs for shows like Mad Men or Game of Thrones within a larger season-long arc.

And here's where it gets really interesting... There may even be intermediate arcs that hold two or more episodes together with cliff hangers.

This form of structure has been identified as "tiered" in a great article by Mike Jones that appeared on the Australian Film, Television and Radio School blog back in January of 2011:

Here's how Mike Jones explains the tiered structure in the context of a serialized show: "Battlestar Galactica stands as a very prominent example of the [tiered] style. Each season as a clear set of macro-level series story-lines that are contributed to incrementally. In tandem are self-contained story-lines that offer closure at an episode by episode level. Operating amidst this are clusters of multi-episode arcs that deliver a third form of closure to a story-line played out over several episodes grouped together."

So, now that we have a clearer sense of how serial TV shows are structured, let's look at how Mr. Kuschke advises gamers to think about writing a game (as a series of episodes) borrowing the tiered structure of a TV serial:

"[M]ethods for linking story arcs together, for providing closure and climax points regularly are already out there... Due to their expected length games are much closer to TV series than to the average 90 minutes Hollywood movie or a typical stage play."

"[T]he three act structure... simply isn’t made for stories of [game] length! Television has found much better structures for this purpose over the last decades. Daily soaps and prime time serials like Lost, Breaking Bad and many others are using them with great success...  Episodes have self-contained story arcs, that bring a regular element of closure, while also providing series-long arcs and multi-episode arcs that join several episodes together."

Thanks to Gary Hayes and Siobhan O'Flynn for inspiring this blog post.

(Let me note again, just for the record, I have very little experience working with game designers. But working with screenwriters - and training producers who will be working with screenwriters - is an area where I do have some experience. And working on episodes that have self-contained story arcs, with some measure of closure, "while also providing series-long arcs and multi-episode arcs that join several episodes together" seems like great advice to me. What do my friends in the gaming community think? Is this old news? Or is this approach from TV something game designers might find useful?)

UPDATE: October 30h, 2013 Here's a link to a fascinating scholarly piece by Jan Simons, Associate Professor in New Media Studies at the University of Amsterdam, about Narrative, Games, and Theory. A representative excerpt? "[S]tories are often about characters who face difficult decisions, impossible moral choices and conflicts with rivals...[R]eaders, spectators and game theorists alike are confronted with questions like: “What would you have done?”; “What was the best way to act?”; “What should the heroine have done?”..." Thanks to Siobhan O'Flynn for sharing Jan Simons' absorbing piece of writing about the common ground between games and narrative.
Posted by Randy Finch on Tuesday, October 29, 2013