Guanxi in the Age of Social Media: Relationships and China's Most Exclusive Social Network, P1.com

In the West, there are social connections that bind people, sometimes based on attending the same school, coming from the same town, being part of the same unit in the military or worshipping in the same church, etc.

In China, there are similar connections - often based on being school friends, co-workers or members of organizations like the military or exclusive clubs, part of an extended family, etc.

And in China there is even a unique Chinese term, guanxi, to describe the benefits that accrue from strong social connections.

Guanxi is not just about growing up in the same town or "old school ties" - although that can help.

Good guanxi can be earned in many ways. And the gestures that earn guanxi are best when they are (or appear to be) offered voluntarily.

Much to the consternation of some Western business-people, guanxi has to be built over time.

We, in the West, are used to being direct and "getting down to business." But doing business in China usually requires an intricate dance of building guanxi.

And the fine line between offering the favors that are crucial to building guanxi in China - versus unethical influence-seeking through inappropriate gifts - has tripped up more than a few Western business people.

The last thing a Western business person wants to do is cause a Chinese partner to "lose face" (shī miàn zi 失面子). For example, it's almost always a mistake to openly criticize a Chinese colleague in the presence of his or her peers. Conversely, many Western business people fail to understand how "giving face" (gei miàn zi 給面子) is part of the ritual of guanxi. In China, showing appreciation through public praise or expensive gifts is often part of how guanxi is established and nurtured.

At its base, guanxi is about trust. And, as Christopher Warren-Gash wrote in a March 15th, 2012 post to Forbes: "In a working culture where lying and cheating is [too often] just “business as usual”, developing guanxi allows the entrepreneur to swim into the safe waters of honest dealings."

So, in Chinese culture - even in this era of rapid social mobility and new wealth - the value of guanxi persists...

Guanxi has even become part of the world of social media.

For example, [in 2013] P1.com (initially known as P1.cn) was a Chinese social network for people of high social status that relied primarily on referrals.

Without a referral from an existing member of P1.com, applicants had to provide access to their email account - so that P1 could check for five contacts already registered as members.

But, in a New World twist on the traditional concept of guanxi, there was a third way to gain access to P1.com...

The site employed a team of street photographers in Beijing, Shanghai, and Guangzhou – where the majority of its members lived – to take “photographs of China’s trendiest individuals.”

People chosen by the P1.com roving street photographers (chosen for the trendiness of their fashion and their cool personal appearance) might just get invitations to join the site. 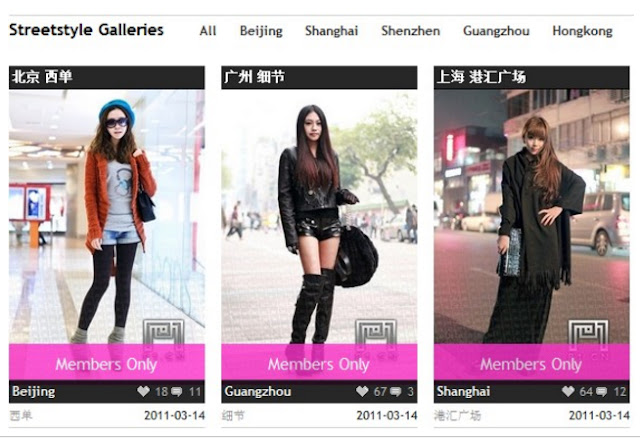