Movie Marketing: Data On The Number of People Using Mobile Devices to Go Online in the US Suggests an Even Bigger Boom Is Coming In China 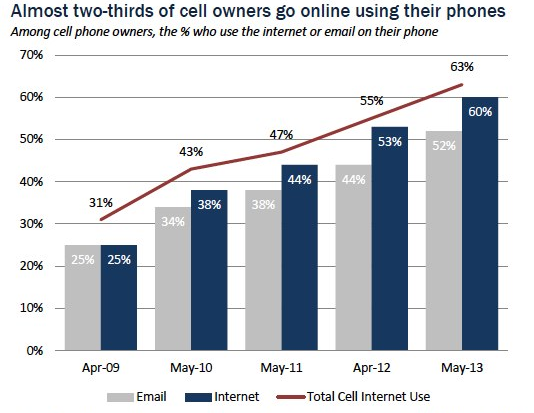 According to Pew Internet Research published on September 16th, 2013, the proportion of US cell owners who use their phone to go online has doubled since 2009.

That translates into 57% of all American adults going online with their mobile devices.

The world's most populous country, China, is not yet accessing the internet in the same way.  But China has already begun a rapid rise in the use of mobile devices to go online.  Even though in 2013 China is closer to the beginning of the chart above than to the end, a period of staggering growth is already underway.

In the first half of 2012, less than 35% of all Chinese adults had accessed the internet using a mobile device. And of that group, most were simply using their smartphones and tablets for email and texting.

The era of online video for mobile devices had not really hit in China in 2012.

In 2012 only about 100 million users were accessing video on their mobile devices in China.

As every Hollywood film executive knows, the potential market for films in China is huge.

There are 1.3 billion people in China. Box office has been growing at close to 30% year-on-year for the several years.  And a building boom has lead to an explosion of new high-end movie screens (last year China was reportedly opening eight new movie screens - many of them suitable for 3D - a day).

How will online video and millions of new smartphones change the marketing of films in newly movie-mad China?

What many Hollywood executives may not yet realize is that China's biggest mobile phone company, China Mobile, is just rolling out 4G connectivity that will - for the first time - allow for video on smartphones to the vast majority of their 740 million subscribers. (China Mobile already has 7 times as many subscribers as Verizon USA - and China Mobile is working on rolling out 4G to all major Chinese cities by mid 2014.)

How will the new functionality of phones (the fastest streaming video yet), coupled with the boom in theaters and movie-going, converge in China?

The number of Chinese mobile device users who are able to access and share video marketing messages is about to explode.

And, if China's rate of adoption is anything like what has happened in the last 4 years in the US, China is on track to become the world's biggest motion picture market at exactly the same moment that access to motion pictures on mobile devices becomes essentially ubiquitous.

While some users will opt for watching entire feature length films and TV programs on their mobile devices - experience in the US shows that mobile video is also an amazing tool for marketing films... films that will be viewed elsewhere (at home or in a movie theater).

If the pace of change continues, China will become the main market for mobile advertising of films in the next five years. Maybe even before 2018.

Even if that dizzying pace in China slows down, the needle that has been stuck on what worked in the US market for over 100 years is starting to move.

Motion picture marketing will increasingly be driven by how Chinese customers discover and share videos online.

If you're trying to appeal to the global market (which is how Hollywood films are currently developed and sold), the online tools for marketing films will first need to work in China.

No one can say with certainty - but tools that encourage social sharing - like Vine and video on Twitter - are probably a very good place to start.

If I'm right, familiarity with the best apps for spreading videos to mobile devices in China will soon become more important to Hollywood than newspaper ads and magazine covers in the US.

The Old World forms of marketing will not entirely disappear - but, in the New World, online messages that are shared by Chinese fans using their mobile devices (with links to films, embedded clips and maybe even interactive games based on motion pictures - a marketing arena that is basically unexplored in China today) may soon become a key platform for Hollywood marketers.

Hello, friend. Thank you for the excellent publication. I like to travel. During the trip, I read the website https://set-travel.com/en/blog/11041-top-10-most-expensive-cities-in-the-world-in-2012 Thank.