Is Carelessness in The Hollywood Reporter Reflective of a General Inattention to China's Film Biz? Why Getting the Facts Wildly Wrong About Bona Film Matters

An impossibly large sum of money....

The reference to $163 BILLION is clearly a mistake. The actual amount of the funding that was announced was more like $163.4 million (RMB 1 billion).

I realize to some readers getting all worked up about a typo (even one that is repeated in a prominent headline and text of a leading US trade industry outlet - a mistake that has remained uncorrected for over a month) might seem hyperbolic.

The answer, of course, is that Hollywood should care.

China is on pace to surpass the US as the leading territory for film box-office in this decade - and Chinese billionaires may represent the last chance for some of the current crop of Hollywood studio heads to keep their jobs.

And Bona is a leading movie production and distribution company in China. The company is traded on the Nasdaq (BONA). And Bona is currently the largest non-government owned film distributor in China (with close to 20% market share in the second quarter of 2013). In other words, The Hollywood Reporter's goof is - from the Chinese perspective - a bit like getting one of the major US studios numbers wrong by 100,000%.

And Bona is not just handling Chinese films we'll never hear about in the West.

Bona is currently prepping the Chinese release of the Hollywood action comedy Red 2 (with Bruce Willis, Helen Mirren, John Malkovich and Anthony Hopkins) later this year - and the company is just rolling out the 3D disaster film Inferno 3D (which has Bona as an investor) - which might be the kind of film that could cross from East to West.

As of Sept. 2013, Bona has begun production on a new action drama, From Vegas to Macau, slated for 2014 release starring Chow Yun-Fat, Nicholas Tse and Tian Jing.

And Bona is currently in post on at least three potentially big films for 2014: 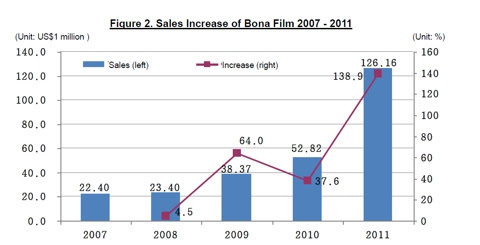 The company also acts as talent manager - representing 20 artists as of December 31, 2012.

In other words, Bona is the kind of vertically integrated motion picture business that existed in the US prior to the consent decrees that broke up the major studios circa 1949 -1954.

Bona's net income was $4.1 million in the second quarter of 2013 compared with $2.8 million in the same period last year. In a conference call (covered on August 29th, 2013 by The Hollywood Reporter) Bona founder and chairman Yu Dong reported that "net revenues from film investment and production were $7.5 million, mostly from its investments in films released in the second quarter of 2013, as well as sales of TV show Flying Swords of Dragon Gate. The 40-episode show was a big driver of revenues during the quarter. Bona chief financial officer Amy Xu said [during that same conference call with The Hollywood Reporter] that Flying Swords of Dragon Gate contributed $5.7 million (35 million yuan) to revenue in the quarter."

And, on September 30th, 2013 George Szalai writing in the The Hollywood Reporter, announced that the Chinese investment firm, Fosun Group, was acquiring a 6.4 percent stake in Bona (purchasing shares from Matrix Partners China Funds and some of Bona's pre-IPO shareholders) - which would reduce Bona founder Yu Dong's interest from around 27 percent to approximately 24.1 percent after the deal closed in 10 days.

Bona's newest investor, Fosun Group, is a diversified Chinese investment firm (mining, gold & jewelry retailing, catering, real estate, pharmaceuticals, etc.). The stake in Bona that Fosun has taken fits into Fosun's continuing interest in leisure and media companies that sell worldwide, but that are rapidly expanding in China.  For example, Fosun has a major stake in resort hotelier Club Med. After Fosun acquired 9.7% of Club Med in 2010, the first Chinese Club Med opened six months later, with another Chinese Club Med resort opening in 2012, and then five more expected by 2015. All that expansion will make China the biggest Club Med destination outside France in under 5 years. In addition, Fosun has a major stake in advertisement-media company Focus Group, which sells all sorts of digital displays, from elevator TV monitors to stadium size screens.

UPDATE: On Friday Dec. 11th, 2015 trading in Fosun International shares in Hong Kong were halted after Guo Guangchang, the firm's billionaire chairman, was reported to be missing. According to a Dec. 10, 2015 report in Caixin,  the chairman had been unreachable since noon on Thursday Dec. 10th, 2015 "amid speculation that he has been put under investigation for graft." Guo, who is number 11 on Forbes 2015 China Rich List, reportedly owns 45.84 percent of Fosun International Ltd., the Hong Kong-listed subsidiary of Fosun Group.
Posted by Randy Finch on Monday, September 30, 2013