Why Aereo Scares the Networks 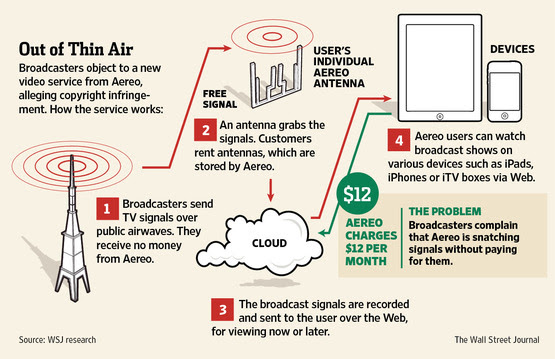 Lately the spines that support the heads of ABC, CBS, FOX and NBC TV have been shivering. Why? As Hiawatha Bray's May 30th, 2013 review of the new internet service Aereo in the Boston Globe explains, "high-speed Internet subscribers [now, in several US cities, legally] can watch the broadcast channels for less than $10" a month on their iPads or other internet connected devices - and users can skip all the ads, uncoupling TV shows from the advertising that has traditionally paid for it.

What's more, users who pay for Aereo can time shift what their local broadcasters are offering and watch it when they want and where they want on their mobile devices. As of May 30th, 2013, as Mr. Bray reports in the Globe, "Your [$8 / month Aereo] subscription includes 20 hours of recorded programs. For $12 a month, you get 60 hours and the ability to record up to two shows at a time."

How does Aereo work?

As you might expect, Mr. Bray says the executives at the broadcast networks hate Aereo because it undermines their traditional advertising-supported revenue model - and (unlike cable operators who pay the networks for the right to rebroadcast over-the-air signals on cable) Aereo isn't paying the broadcasters anything: "Executives at CBS and Fox have said that if Aereo survives court challenges, they may stop over-the-air broadcasts altogether, and offer their shows only via cable and satellite."

The service that Aereo provides - offering broadcast TV on cellphones and other devices with the option of skipping ads and time-shifting - may seem well worth $10 a month.  It may even be worth $10/month to some users just to kill off intrusive broadcast TV's commercials. But the networks need a huge audience that sits through ads to justify the prices they charge advertisers. And the broadcast networks have gotten used to receiving payment from cable companies that rebroadcast their signals.  If Aereo starts to chip away at the numbers that reportedly are watching ads - and Aereo's rationale for not paying a rebroadcast fee continues to hold up in court -  it might even lead to the collapse of a network...

What does Aereo mean for paid cable?

Right now, you can't watch cable TV on Aereo.   That's because Aereo is only capturing free over-the-air broadcast signals via a small antenna - one for each user for live TV - and simply delivering that free content to the user's internet-connected device  for a smal fee.  If Aereo started capturing cable content - they'd have to pay for it just like everyone else.  So rebroadcasting cable signals is not part of Aereo's plan.

In a bit more detail, as explained in Forbes on April 10th, 2013, here is the legal argument that supports what Aereo is doing:

"Consumers have the right to receive a broadcast [emphasis added] TV signal on any device they choose (originally just a TV) and by extension, record programs for their own personal use. That is the intent and the purpose of the law [concerning broadcast TV]. Broadcasters get to use the airwave spectrum (and make money off of advertising) in return for allowing people free access to these broadcasts—for their own personal use. Individuals or unlicensed companies are not, however, allowed to re-broadcast OTA [over-the-air] TV content, which has prevented live TV from being streamed online in any reliable and legal manner. Aereo has gotten around this problem by setting up antennae farms where its customers can license their “own” individual antenna that is used to receive a signal through which they can receive OTA broadcasts (and record them on a cloud DVR) to watch on web-connected devices."

It's kind of a Rube Goldberg solution - but it does seem, so far, to make legal sense.  Aereo says they're just helping customers to receive the FREE over-the-air signal that is every consumer's right.

What many of us have been predicting - TV Everywhere - is at the heart Aereo's business model.  Whether the legacy networks like it or not, Aereo is providing s service that moves the consumer closer to TV Everywhere - the ability to receive favorite content on all devices (including mobile devices).  Access to all our favorite content everywhere is what we're coming to expect from our wireless internet... and if the networks won't give us apps to do that (why haven't they?).... then there's Aereo - a classic low-end disruptor.

So far, despite an avalanche of lawsuits, the courts have not acted to stop Aereo from rolling out their service in NYC and Boston and a handful of other American cities.

And consider this, as Hiawatha Bray writes in the Globe, "if Aereo is [ultimately] declared legal by the courts, cable companies [might also find a way to] start transmitting broadcast shows without paying for them. One company, Time Warner Cable, says it’s looking into that option. The mere threat could force broadcasters to charge cable companies less for rebroadcasting rights, which would mean a massive loss in network revenues."

In the long run, I expect that Aereo will push the networks to begin offering their content in new ways themselves. The alternative is to suffer the fate that has befallen newspapers and record companies.  Today the networks (like other old world media companies that have stuck their heads in the sand as the internet has exposed weaknesses in their revenue models) face competition from  low-end competitors (like Aereo) who have figured out how to provide a good-enough service to the low-end of the market in ways that avoid the weaknesses  in the old system (in this case, no 21st century way to conveniently access broadcast TV unless you put up with annoying ads and often hugely inflated cable bills).

What does this mean for viewers outside the few cities that currently offer Aereo right now?

Aereo doesn't support people outside the reach of local broadcasters: As Mr. Bray explains, "Aereo works only as long as you’re within broadcast range of local channels, based on where you signed up for the service. It uses a GPS or Internet IP address information to check for channels. That means if you travel to, say, Chicago, your Aereo account will stop working until you return home."

So, for people who travel, Aereo isn't the boon they might hope for... Although, (I haven't tested this one myself) a VPN with a server in an Aereo city might allow one to stay in touch with local news and more from home while you're on the road.