Cease and Desist Idiocy: How The New York Times Overreacted to a Compliment and Positioned Themselves Against a Free Press 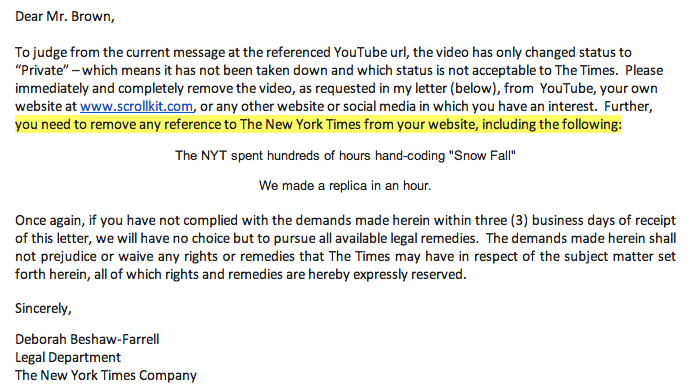 In a May 22nd, 2013 post to paidcontent, Matthew Ingram explains how The New York Times took a compliment and turned it into a public relations boo-boo and an attack on the freedom to write about their recent compelling experiment into how text and motion pictures might converge.

As Matthew Ingran explains: "Cody Brown is the founder of a New York-based startup called Scroll Kit, whose software makes it easy for publishers to produce interesting layouts without having to do a lot of programming. When he saw the [New York Times Pulitzer prize winning online] Snow Fall feature, he thought it was the perfect example of what his software could help media companies do, so he created a video showing how he replicated the design elements of the story."

After a letter from the Times objecting to his public YouTube video. Mr. Brown changed his video to "private" - which prompted a second letter from the Times legal department (above) that in Mr. Ingram's view "goes above and beyond any fair interpretation of copyright law and tells the Scroll Kit founder that he needs to remove any reference to the NYT from his website."

I agree with Matthew Ingram - although I realize the Times has more in its legal arsenal than just a copyright claim. Everyone reading my blog understands that monetizing content in the New World is challenging.  And my students know that, in addition to copyright,  businesses and individuals have certain rights to prevent others from commercially exploiting their names and reputations. But the idea that  that The New York Times can prevent "any reference to The New York Times" on a commercial website - by writing a letter threatening "available legal remedies" - stretches the rights The New York Times legitimately might assert to the breaking point.

The scope of any intellectual property that the Times might want to protect (on the facts, if Mr. Brown had the money and patience to go to court against the NY Times, I agree with Mr. Ingram that everything that Mr. Brown took might be protected under fair use) and the right to defend themselves from unfair competition or commercial exploitation cannot extend to forbidding "any reference to The New York Times."