Will Big Data Turn "Viewers Into Puppets" Or Is Andrew Leonard a Muppet? 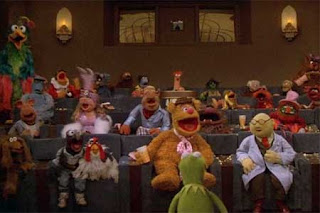 In an over-heated February 1st, 2013 opinion piece for Salon, Andrew Leonard suggests that access to "big data" will inevitably damage filmmakers and filmmaking.

Mr. Leonard is right about one thing, online film services like Netflix are gathering unprecedented amounts of information from their users: "Netflix doesn’t just know that you are more likely to be watching a thriller on Saturday night than on Monday afternoon, but it also knows what you are more likely to be watching on your tablet as compared to your phone or laptop; or what people in a particular ZIP code like to watch on their tablets on a Sunday afternoon. Netflix even tracks how many people start tuning out when the credits start to roll."

But what is the basis for Andrew Leonard's concern that "creative decisions about how a show looks and feels [will now] be made according to an algorithm counting how many times we’ve bailed out of other shows?"

Does Mr. Leonard have any experience with filmmakers?

Has he ever visited a film set?

Is Mr. Leonard aware that detailed audience research has been available to studio execs for decades?

Very expensive and specific information about "audience preferences" has been circulating in Hollywood at least since the days of Irving Thalberg - but (despite Mr. Leonard's fears) somehow the chaotic and unpredictable business of creativity has survived - and filmmakers have somehow found ways to resist prior generations of bean counters.

Mr. Leonard's dystopian vision (of how big data will kill creativity) is, in my opinion, bullshit.

Specifically, it's bullshit to think that specific data about what viewers did in response to past shows will somehow result in the death of original filmmaking...

In my view (just like Mr. Leonard's own fanciful ideas have twisted his thoughts into places that are unsupported by any evidence?), the quirks and creativity of writers, directors, actors, editors, set designers, costumers, film executives, etc. will guarantee that the availability of big data will not turn filmmakers or the audience into "mindless puppets."

As Nigel Thrift, a leading scholar on how humans have responded to changes in technology, has written: "Information technology changes some things, for sure. But it doesn’t change everything."

UPDATE: May 31st 2014 A Pandodaily piece by Sarah Lacy confirms that big data will not replace writer's choices at Netflix. Speaking at Re/code’s inaugural CODE Conference, Netflix CEO Reed Hastings confirmed that Netflix does not, and will not, suggest changes to plot or characters based on viewership data and trends. So... there's that...
Posted by Randy Finch on Wednesday, February 13, 2013