China Looms Large in the Future of Filmmaking 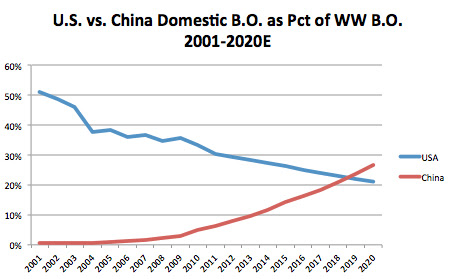 As I've noted elsewhere in this blog, the balance of power in the film business seems to be tipping toward China.

One great source for the latest information about the Chinese market for theatrical films is Rob Cain's insightful and (in my experience) generally reliable chinafilmbiz blog. (Rob's blog was the source for the chart above that suggests China's box office will soon overtake US box office.)

But what about the recent history of the Chinese film market? And who are the key Hollywood players in the the rapidly evolving Chinese film business?

If you're at all interested in Hollywood and the Chinese film business, you can start by reading a February 21st, 2013 post to The Wrap by Lucas Shaw. In that post, Mr. Shaw provides a brief overview of how non-Chinese film production and distribution companies (starting with Australia's Village Roadshow's 40 year involvement in the Chinese film market) have evolved along with the Chinese market: It's a useful introduction if you're a China-watcher wondering how Western players might participate in the rapidly expanding Chinese film market.

To me it's fascinating to think how companies like Village Roadshow - that began their relationship with China by distributing Bruce Lee movies in Australia - might build on that history to participate in the coming explosion of Chinese film production and distribution: “There are [currently] over 300 different film companies in China,” [Greg Basser, CEO of Village Roadshow Entertainment Group] told TheWrap. “There’s this huge appetite. Although we’ve released 70-odd [English-language] pictures in China, we decided to focus on making films in Chinese for the Chinese market.” And the marketing expense? “A fraction," according to Basser, because studios don't have to spend anywhere close to the same amount on TV and print advertisements in China as in the U.S."

Is the Chinese market easy to crack? Is China going to become a Hollywood filmmaker's paradise?

As Lucas Shaw writes in The Wrap: "Hyde Park Entertainment CEO Ashok Amritraj, whose company operates a fund out of Singapore that it will use to make local [Chinese] co-productions, said the number of co-productions remains small because of legal and logistical difficulties. "It's getting more tricky to qualify English-language films as co-productions," Amritraj said. "The rules are fairly strong and one has to be very careful how one qualifies.""

And there are ongoing investigations into bribery and other irregularities that suggest the terrain for Hollywood filmmakers working in China can be tricky.
Posted by Randy Finch on Saturday, February 23, 2013