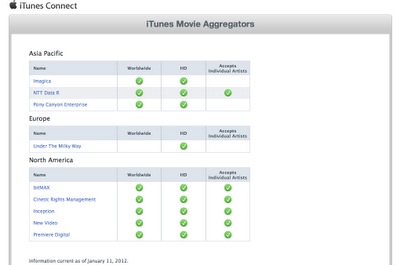 If you want your movie to appear on iTunes, you must go through one of their approved aggregators.

According the The Film Collaborative: "Aggregators offer valuable services to content owners/film distributors who want to sell content on mass audience digital outlets such as the iTunes Store. For a fee they can format and deliver your content to the outlet’s specifications and act as the primary contact with the outlet’s operations team to ensure timely processing of the digital files. The outlet typically pays the aggregator for all transactions, and the aggregator then pays the content owner. Typically aggregators take fees either upfront or as a percentage of sales, but do not own any rights to the content."

The image above is current as of Sept. 6th, 2012 - be sure to use the link to Apple's site to get the most current list of approved aggregators. Many thanks to Sheri Candler for the link.
Posted by Randy Finch on Friday, September 07, 2012