Ask the Damn Follow-Up: Did Aaron Sorkin Purge Writers From HBO's The Newsroom and Is the Question "A Distraction for the Viewer?" 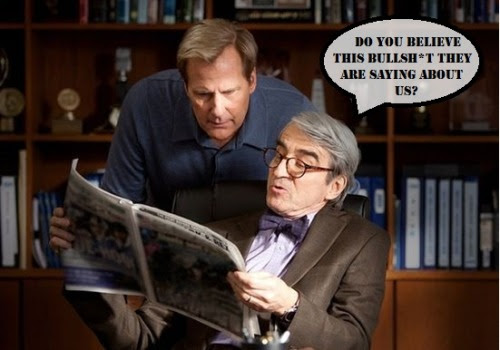 Fans of Aaron Sorkin's series on HBO, The Newsroom, will remember the ringing words of anchor Will McAvoy (Jeff Daniels) to young journalist Sloane Sabbith (Olivia Munn): “Ask the damn follow-up, and then demonstrate with facts how the guest is lying.”

But, when confronted by journalists at the Television Critics Association’s press tour, series creator Aaron Sorkin was able to avoid any follow-up questions to his claim that a report in the July 19th, 2012 The Daily about mass layoffs in his writer's room was inaccurate. Here's what Aaron Sorkin told the journalists:

"A couple of weeks ago, an un-sourced and untrue story appeared on the Internet that got repeated all over the place“...

"The writing staff was not fired. Just seeing that in print scared the hell out of the staff. They’re acting very strange, they’re coming to work early, they’re being very polite to me.”

Instead, Sorkin explained, a pair of writers assistants were promoted to story editors.

But it now appears that Aaron Sorkin may have been less than candid with the press. Two reporters for the Vulture continued to dig, even though Aaron Sorkin declined to answer their follow-up questions (claiming that questions about staffing in the writer's room were becoming a "distraction for the viewer"), and this is what they learned:

"Two different, very well-respected television agents in a position to know what had happened told us that they understood that three of the eight season-one writers on the show would be back. At least four and possibly five writers from season one aren't returning, they said."

While what Aaron Sorkin said on the press tour may have been technically accurate - the non-returning writers may have been at the end of their contracts, so they were not fired - the note he struck while attempting to discredit the original report seems inconsistent with the lofty ideals of his show. In short, the original report (about a shake-up in the writer's room) may have been essentially correct (although The Daily's snarkiness and the implication that Sorkin was keeping an old girlfriend on staff for less than ethical reasons are offensive) - but Aaron Sorkin wanted to leave another impression - one that doesn't reflect the gritty precarious truth about being a writer in Hollywood.
Posted by Randy Finch on Wednesday, August 08, 2012