A Million Monkeys and a Typewriter Might Not be Necessary: Just Give a Macaque a Camera 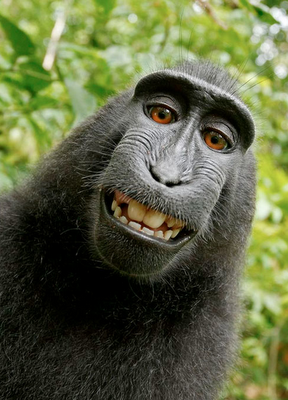 A July 4th, 2011 article in the Dail Mail reports on what happened when nature photographer David Slater (while visiting a national park in North Sulawesi, Indonesia) left his camera unattended. Apparently some wild black macaques seized the opportunity to take a number of amazing self-portraits (see above). The beautiful monkey-made results contradict the findings of a 2003 experiment conducted by researchers from the University of Plymouth - who left a computer keyboard in the enclosure of six Macaques in an English zoo. Instead of replicating the works of Shakespeare in a month (as hypothesized), the English monkeys produced nothing but five pages "consisting largely of the letter S." Apparently, in the experiment, the caged lead male monkey began by bashing the keyboard with a stone, and the other monkeys followed up by urinating and defecating on the keyboard.
Posted by Randy Finch on Sunday, July 29, 2012