Being Popular on Social Media: Spreadable Content and Why Your "Viral Coefficient" Must be Greater Than One

For your content to spread via social media, your video or webpage online needs momentum, picking up tiny additional slivers of attention to move from your immediate contacts to a larger community.

That's the simple truth of social media - if it doesn't spread, it's dead.

The number that expresses how spreadable your content is (e.g., for every person who views a short video promoting your film, how many will share it?) is known by mathematicians as the "viral coefficient."
Understanding how your content's viral coefficient works (even though it sounds like math, and I imagine many filmmakers have already stopped reading this post) is essential to building a successful social media marketing campaign.

Here, in language that I hope every filmmaker can understand, is an explanation of how the viral coefficient works.

As I've already suggested, the viral coefficient is the number of new users, on average, that each community member brings to the community.

Here's the important info: For your content to spread via social media it must have a viral coefficient of greater than one.

You can skip ahead a couple of paragraphs to the bottom of this post if you're only interested in a demo of the (surprising?) numbers - but filmmakers may want to spend a few moments considering how understanding your content's viral coefficient can be really useful when it comes to designing a new (or tweaking an existing) online campaign. Making the video that promotes your film just slightly more spreadable may mean the difference between A) a video that spreads from user to user - eventually going "viral" with millions of views, and B) one that is almost as popular - but dies out shortly after launch.

The difference between video A and video B may be very small - but a video with a viral coefficient of greater than one will spread - while video B (with a viral coefficient of slightly less than one) will die out. Here's why: Even though everyone in your family and on your crew shared video B with all their friends, and some of their friends also shared video B with their friends, etc., the rate of spread (the viral coefficient) did not add new users at a rate greater than one new user for every existing user. Notice: Even if the creator of video B starts with a core audience of 1,000 people, or gets a celebrity to tweet the link to video B, if video B isn't adding new viewers at a rate of more than one, it will soon die out. Instead of building a huge initial list of friends or getting a star to endorse your work, filmmakers who plan on using social media to promote their work need to focus on making spreadable content. This is especially true if you have strong content to promote your film, but haven't made it easy to share: A small tweak to video B (e.g., making the "share" button more prominent) may be all you need. That's because the difference between .9 new users for every existing user and 1.1 users for every existing user may in fact be very small (e.g., a slightly shorter video, a funnier opening, a more obvious share button, etc.) - but the impact on how your content spreads could be huge. In short, for your content to spread via social media, it must have positive spreadability (every time it is shared, more people share it).

Let's continue working with the example of a video you've made to promote your film. Here's what would happen to an online video with a viral coefficient of less than one: It will die out. For example, if you start out with 100 fans who look at your content and a viral coefficient of 0.9, then those 100 members will share your video with 90 new viewers. Those 90 viewers will bring 81 viewers, and they'll bring 72, and so on, and the community will ultimately plateau at about 600 views (after roughly 10 periods of time).

So, even though you have a dedicated fan-base sharing your content, your social network (with a viral coefficient of just less than one) will soon stop growing on its own. 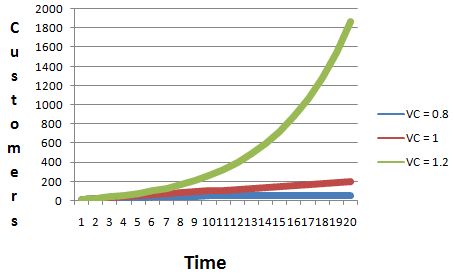 Thanks to Troy Janisch for the link to the 1947 educational film "Are You Popular?"
Posted by Randy Finch on Wednesday, June 13, 2012