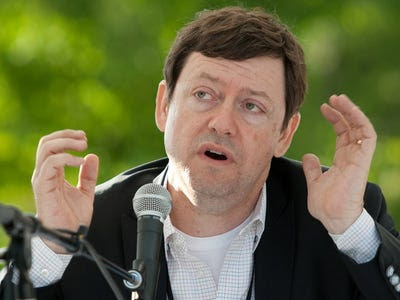 Fred Wilson is a venture capitalist whose January 15th, 2012 blogpost for the Business Insider questions the current business model of the major studios:

"Making movies is expensive and risky. I totally get that the studios need to make a lot of money on those movies to make their business model work. But denying customers the films they want, on the devices they want to watch them, when they want to watch them is not a great business model. It leads to piracy... but more importantly it also leads to the loss of a transaction to a competing form of entertainment."

What would happen if the studios started offering their latest films on ubiquitous digital platforms for $5 per view net to the studios on the same day everywhere in the world?

"I understand that many participants in the broader film ecosystem [e.g., theater owners and the people who make and distribute physical copies like DVDs] might do worse under this model. And I understand that moving to such a model will cause great disruption and pain to the broader film industry. But the studios themselves are likely to do better in a direct distribution model when they reach a broader market at lower effective prices to the end customer. This is what happens in digital distribution. Prices come down, markets expand, customers see lower prices and broader availability."
Posted by Randy Finch on Sunday, January 15, 2012