Guest Post: James Fair on "The Comfort of Recognizable Shapes" 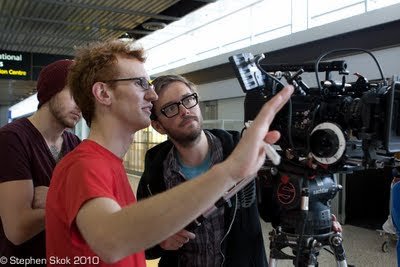 Flash back one hundred years. Cinema burst into existence in a variety of standards and formats, different tools and processes. It proved to be popular and potentially lucrative so processes became standardized and formalized to create repeatability of success. The studio system developed genres, production processes and business models to sustain this.

Jump to now. Social media has burst into existence in a variety of standards and formats, with different tools and processes. It is popular and potentially lucrative so we try to standardize and formalize our projects to create repeatability of success.

The repeatability of success! What works and what doesn’t? Why reinvent the wheel each time? We can build on the successful elements and abandon the bits that don’t work. This is a logical approach to take, right?

Part of the problem now is that there is simply MORE of EVERYTHING than there was 100 years ago. There are more of us; there are approximately 7 billion of us now compared to 1.6 billion in 1900. More people have access to the technology and therefore the potential of being a pioneer, whereas 100 years ago the machinery was exclusive. The availability and the popularity of these new technologies have led to the term ‘ubiquitous media’. The technology is omnipresent. The camera is your phone is your music. Everything, everywhere at the same time. That is a lot of ‘noise’ to contend with and make sense of.

And so we begin to cling to familiarity. The vast majority of web users are conducting the same patterns and site visits on a regular basis. I would love to conduct a survey into how many people say they find Hollywood films boring and repetitive and compare it to their boring and repetitive web habits! We are creatures who take comfort in recognizable situations.

The problem when doing this with the Internet is that this severely limits the potential of what it is capable of. The web began as a platform for horizontal communication and personalized design, away from the hegemony of traditional broadcast media. Whilst it still can exist as such, many commentators like Jaron Lanier find it ironic that we now use only a handful of websites to communicate with one another. It is understandable that we congregate socially in the same places for the sake of ease, but the majority of us go to a handful of websites for information or entertainment too!

“So what?” Well, I find it interesting that when filmmakers are keen to get their project made, it is must usually be sold on its difference. How is it different from that film? Yet it must simultaneously be the same as all the others too, within certain parameters. What genre is it? What kind of length are we looking at? For example, a feature must be over a certain length and a short should be under a certain length. There is even a graveyard in between these two lengths where we consider it unsuitable for cinema, unless of course, you wanted to consider, you know, television.

In all seriousness, I believe that filmmaker’s brains are so hard-wired to the world of sequences and linearity that the ubiquity and potential of new media is problematic. There are numerous blogs and courses by (self-appointed) digital prophets who point towards the way that we can make films in this brave new world. Build a fanbase on Facebook and Twitter! Steer traffic to your Kickstarter! Use gamification! Eventize! Do these things and your project will succeed!

Isn’t there a strange irony in following this advice when trying to be creative? By it’s very nature, ‘following’ something isn’t ‘leading’ it. But we are following it because we are desperate to make sense of the social media that has burst into existence in a variety of standards and formats, with different tools and processes. We want to know what works and what doesn’t! It is essential to the repeatability of success!

My concern is that, for the majority of filmmakers, these technologies don’t have a high ‘effort to effectiveness’ ratio when trying to get traditional films made. Sure, they may work, but building an online audience that will pay for your projects is really difficult and time consuming, and in many cases, is a false economy. This online audience is not necessarily the audience that will come to your ‘eventized’ event, because they are at home, online. Liking your project on Facebook is easy and effortless; taking the time to actually watch your film is quite hard in a busy lifestyle. The time you spend generating this audience could be spent getting your film made in more effective ways.

‘And how?’ I hear you ask. Well that would be telling you, wouldn’t it? And then you would be following me. The point is that we like the comfort of recognizable shapes and processes, and we’ll follow them even if they are not that effective, because it provides a plan. And that is easier than trying to reinvent the wheel and run the risk of failing on our own ideas. Personally, I find this approach is quite deterministic and assumes that our choices are determined by outside forces. I believe that this approach doesn’t acknowledge the role of chance and opportunity within filmmaking. Doing something different may be the thing that gets you noticed.

In a hundred years, I wonder whether we’ll lament the possibility of what the Internet could have been? Before we forced it into the recognizable shape of similarity.

James Fair is a lecturer and filmmaker based at Staffordshire University in England. He is interested in new approaches to filmmaking. Last year he led a team of people to shoot, edit and screen a feature-length movie ‘The Ballad of Des & Mo” in 72 hours in the Melbourne International Film Festival. The film was voted in the Audience Top Ten and has since travelled to other international festivals. He is currently working on a new project called ‘Crushing Snails’. You can find out more at http://crushingsnails.org.
Posted by Randy Finch on Tuesday, August 16, 2011