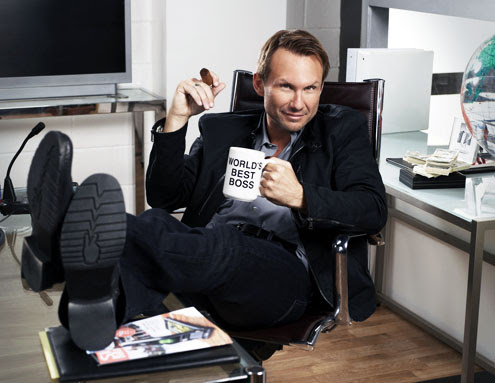 In his laugh-out-loud April 6th, 2011 Salon.com review of "Breaking In" (Christian Slater's apparently awful new TV show), Matt Zoller Seitz unleashes years of pent-up critical rage: Identifying why "so many TV shows and movies glorify people who strut around growling orders and insulting underlings and barking, "Think, people! Think!" and otherwise acting like insufferable jerks." The reason according to Matt? "Hollywood is a dream factory run mostly by and for raging narcissists with power and money."

According to Matt Zoller Seitz, ambitious writers quickly learn they can't go wrong with a series pitch that features an "autocratic mentor boss with no time for pleasantries." These characters (Laurence Fishburne on "CSI," Gary Sinise on "CSI: New York," David Caruso on "CSI: Miami," Forest Whitaker on "Criminal Intent: Suspect Behavior," Tim Roth on "Lie to Me," Hugh Laurie on "House", etc.) embody the "masturbation fantasy of super-rich producers and directors, studio executives, and network suits. The archetype keeps showing up onscreen because it's an easy way to stroke the ego of a boss who's not very smart or self-aware. ("See, the FBI team is headed by this handsome, mysterious, brilliant guy in his forties with this young, hot girlfriend..." "I like it!")."
Posted by Randy Finch on Wednesday, April 06, 2011