James Fair did it! As you may recall, in mid-summer 2010 James and his team set out to do something no one else had ever done. I'm happy to report that James and his British/Irish crew have returned from the Melbourne (Australia) International Film Festival where they shot, edited and successfully screened (to a sold out theater) a feature length film, The Ballad of Des and Mo.

Making The Ballad of Des and Mo wasn't just a stunt. James Fair is an explorer, pushing into new territory. For James, making a feature in 72 hours is one way of pioneering new models of production. In his latest guest post James Fair describes some of what was learned:

THE COMPROMISE CONTINUUM (OR “HOW LOW CAN YOU GO?”) 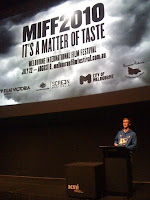 Picture the scene. Interior cinema night. The lights rise up as the credits go down. There is applause as I, the director, walk to the front of the auditorium for a question and answer session from the audience. It is the closing night of the 59th Melbourne International Film Festival and the festival chair Claire Dobbin opens the questioning: “What compromises did you feel you had to make when making a film in 72 hours?”

I am bowled sideways. I never imagined such a question because the thought has never been on my mind. I HATE COMPROMISES. I remember the feeling so distinctly when directing and producing my first (and last) piece for television with Gabby Morton Jones. We were asked to compromise and we have never forgiven ourselves since. The price we were paid was no replacement for the shambolic mess we had made of our good idea. It was a hollow victory seeing it broadcast. And now, after 72 hours of filmmaking madness, after the first screening of ‘The Ballad of Des & Mo’, I am being asked about compromise. I barely find an answer as I am genuinely flummoxed by the question.

It is only later, after three days of crossing Australia on the Indian Pacific transcontinental railway from Perth to Sydney, that I can dwell on the question and formulate an answer.

I consider the pressure of making a feature in 72 hours a small compromise to make when benefitting in so many other ways. The most coveted example is that we got full editorial control, with no objections from the financiers or the festival. We didn’t even have to be selected for the festival as the screening was guaranteed months ago. These elements hang over any director or producer more than any other. How must we cut this film in order to get into festivals? Is 80 minutes too short? Is 125 minutes too long? We had none of that.

I guess I didn’t get to shoot as much coverage as I would have liked to play around with in the edit, which is a compromise, but that informed my planning. There are a few one-shot scenes that would have spiralled into continuity issues, lighting match-ups and a whole host of other problems had we been shooting multiple angles for safety or coverage.

I naturally felt compromised by the lack of budget. We made it for a fraction of the price that we had budgeting for but the financial crisis and the weird nature of our project didn’t help us bring in cash. The extra money would have meant we could throw more technology at the project, money at the cast and crew, and bigger publicity drive. That said; we did a bloody awesome job with what we had, and punched well above our weight. The lack of funds meant we were bonded by the adversity of it all! From my experience, money has the potential to complicate.

There were the obvious compromises to do with the restrictive timeframe, but I didn’t consider them compromises. There would be compromises if you wrote a regular film and tried to shoot it in 72 hours. But I wrote a film with the timeframe deliberately in mind, so it didn’t really matter. I think this is what Claire Dobbin was angling towards with her question…

As I mentioned earlier, I felt these compromises were small in comparison to conventional filmmaking, which has lead me to an interesting personal conclusion that I had never previously articulated. I AM IN SEARCH OF THE MODEL OF PRODUCTION THAT HAS THE LEAST COMPROMISE. I believe that compromise can never be eradicated, because it will emerge somewhere within a production. I actually believe compromise is probably the fulcrum on which creativity and collaboration are finely balanced, and it is essential to filmmaking production. But the reduction of compromise is very appealing. I would like things to run as closely to my original intention as possible.

So, how do I measure this? Well, I made a note months ago about what I wanted from the 72 Hour Movie project this time around (I was really compromised in the Galway 72 Hour project ‘Watching & Waiting’ in 2008). I’m not going to describe them here because they are personal, but of the five things that I wanted to get from the project this time, I got four and a half. That’s pretty good. If there was a continuum of compromise, where ‘WHAT YOU WANT’ is at one end versus ‘WHAT YOU DON’T WANT’ is at the other, I find myself ecstatic at the outcome of the 72 Hour Movie project. I will carry this approach onto other films and in future I will outline my goals as clearly as possible, and then use them as a barometer for how successful my project was against my personal aims and objectives. If they deviate, I will have compromised…

Of course, if you don’t mind compromise, you won’t mind. Some people want to make their film at any cost. In which case you should ask yourself the question – ‘How Low Will You Go?’ What wouldn’t you do to get your film made? Would you make it in 72 Hours just to guarantee a festival slot? Or is that too much of a compromise? Each to their own. I think filmmaking is a personal journey and I am enjoying the ride!

James Fair is a lecturer in Film Technology at Staffordshire University and aims to present his 72 Hour Movie case study at the SXSW Festival in 2011. You can vote for James by using the SXSW Panel Picker (normally, you can follow this link to the SXSW Interactive Panel Picker, but, if it doesn't work for you - you're not alone, I've had trouble with application today, Aug. 14th, 2010).

Female Strippers said...
This comment has been removed by a blog administrator.
September 15, 2010 at 12:21 AM