The Producer of Marketing & Distribution 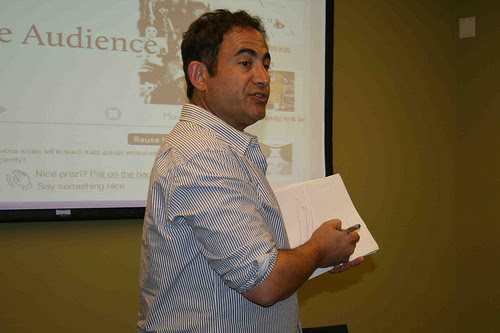 Jon Reiss, author of our favorite book on the new model for indie film distribution ("Think Outside The Box Office" — a break through, step-by-step guide to distributing and marketing a film) argues that "from now on, every film needs one person devoted to the distribution and marketing of the film from inception, just as they have a line producer, assistant director, or editor."

Jon Reiss wants filmmakers to create a separate position, a Producer of Marketing & Distribution. According to Jon, this person should be part of your team from inception, not tacked on after the film is shot.

Why a Producer of Marketing & Distribution? Why now?

In the old indie film world, most filmmakers waited until their film was done to contact distributors. Their hope was that Miramax or another distribution company would pay back their investors with an advance. In return, the distributor would acquire all rights and handle the mysteries of getting the film into the various channels that supply theaters and homes. Those days are gone. Today festival-winning films often don't receive any offers from large distributors. And when they do, the advances for an "all-rights" deal rarely top $80,000. So more and more indie filmmakers are choosing to go it themselves, sometimes splitting the rights among different companies (e.g., a booker for theaters, a foreign sales rep for foreign) while also taking their film out into some of the various channels (like streaming on the Internet) on their own. In this new world of austerity and self-reliance, indie filmmakers must have their own creative and comprehensive strategy for distribution.

All of today's most successful indie film distribution campaigns (like those using social media to build a core audience even before the filmmakers start production) require a specialist whose responsibilities start early and include juggling festivals, theaters, TV, VOD, DVD, foreign and the Internet. Accordingly, hiring a Producer of Marketing & Distribution, before production starts, is becoming a key decision for savvy indie filmmakers.

What are the functions of a Producer of Marketing & Distribution?

According to Jon Reiss, the responsibilities of the PMD might include:

1. Identify and engage with the audience for a film.
2. Development of a distribution and marketing strategy and plan for a film in conjunction with the entire team.
3. Create a budget for said plan.
4. Assemble and supervise the necessary team/crew elements to carry out the plan.
5. Audience outreach through organizations, blogs, social networking, online radio etc.
6. Supervise the creation of promotional and (if necessary due to the lack of a separate transmedia coordinator) trans media elements: including the films website script and concept for transmedia, production stills, video assets – both behind the scenes and trans media, promotional copy and art.
7. Outreach to potential distribution and marketing partners such as sponsors, promotional partners, various distribution entities, publicists.
8. When appropriate, engage the distribution process as designed.
9. Supervise the creation of deliverables.
Posted by Randy Finch on Sunday, May 02, 2010