Will Shepard Fairey Go To Jail? As I've written about previously on this blog, and as reported in the Sept. 7th, 2012 Hollywood Reporter, Shepard Fairey, the "artist behind the iconic Obama poster pictured above, manipulated evidence in a civil lawsuit against the Associated Press." Because he tampered with the evidence, Shepard Fairey now faces a jail term - not for the original charge of copyright infringement - but for destroying and fabricating images that would have proven his unpermissioned copying of a photo that was owned by the AP. 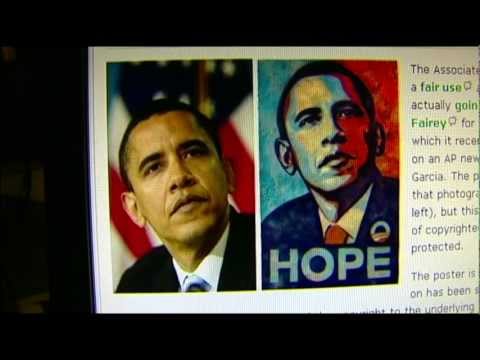 When the AP claimed (shortly after President Obama's election) that Fairey had used their photo without permission as the basis for his poster and T-shirts, Fairey made a terrible decision: "In order to cover his tracks about which image he used as the basis of "Hope," Fairey doctored evidence. As he later admitted on his blog, he "submitted false images and deleted other images" in the case. After he manipulated the evidence and was caught, his attorneys at Stanford Law School's Fair Use Project abandoned him."

In 2011, Fairey settled his original copyright dispute with the AP (reportedly promising not to use "another AP photo in his work without first receiving a license from the news organization" - as well as forking over a rumored $1.6 million, which should more than cover court costs for the AP).

But the legal consequences for Fairey's evidence tampering are just now being decided in a NY court. And the prosecutor is asking for jail time: "A sentence without any term of imprisonment sends a terrible message to those who might commit the same sort of criminal conduct in which the defendant engaged."

UPDATE: On Sept. 7th, 2012 CNN has just reported that "Shepard Fairey was sentenced for two years' probation for tampering with evidence during his copyright battle with the Associated Press."
Posted by Randy Finch on Friday, September 07, 2012