Did Fox Take (Without Permission) a Video Game Clip, Then Claim No One Else Could View the Clip?

"Just when you think you’ve seen every ridiculous example of a bogus DMCA-style takedown, another steps up to take the crown."

Today's post illustrates how the law of copyright can trip up even large corporations. Like Rupert Murdoch's Fox.

Rupert Murdoch is a staunch opponent of "fair use" - arguing that even the smallest unpermissioned use of his network's content should be illegal. But, of course, Fox has a history of using content that belongs to someone else without permission.

Which brings us to the May 2016 moment when Fox took a gamer's YouTube video - made while the gamer was playing a 1980s arcade game called Double Dribble. Fox then used the gameplay video (without permission?) in a TV episode. Then, and this is the part where the DMCA comes in, Fox tried (momentarily, as it turns out) to claim the underlying clip as their own...

Let's start at the beginning...

How was Fox able to have someone else's clip removed from YouTube?

The answer requires an understanding of a 17 year old revision to US copyright law known as the DMCA...

DMCA stands for Digital Millenium Copyright Act. (And, if you attended the class we had this week on Copyright and International Trade Agreements, you might also be interested to know that the DMCA is a 1998 US law that implements obligations agreed to under the World Intellectual Property Organization in 1996.)

In 1998, the DMCA imposed new penalties for circumventing copy protection and increased the penalties for copyright infringers. But perhaps the biggest innovation under the DMCA was that internet service providers and other intermediaries could be exempt from liability - when their services were used without their knowledge to infringe copyright - as long as certain steps were followed.

This limitation of liability under the DMCA is known as the "safe harbor" - since an area where there is no liability can be considered a "safe harbor."

What specific steps entitle an internet service provider to the DMCA's safe harbor?

As most students of copyright law know, someone who is not directly infringing copyright, but who contributes to the infringing acts of others, has historically been liable under US law for what has been known as "contributory liability."

So back in October of 1998, almost 7 years before the domain name YouTube was even activated (in Feb. 2005), the US law was revised to protect providers "of online services or network access, or the operator of facilities therefor” 17 USC §512(k)(1)(B). Specifically, the DMCA created a safe harbor for online service providers against copyright infringement liability.

How exactly does the DMCA safe harbor work?

If companies that allow user uploads (like YouTube) follow the DMCA rules - i.e., promptly blocking access to alleged infringing material or removing such material from their systems when they receive notification of an infringement claim from a copyright holder or the copyright holder's agent - the OSPs will not be liable for copyright infringement.

But note: When an OSP receives a takedown notice from a copyright holder or their agent, under the DMCA the OSP is required to promptly remove or disable access to the accused material - whether the material is infringing or not.

What if the uploader argues fair use?

Or what if the entity claiming to be the copyright holder isn't really the owner?

According to a May 20th, 2016 report in TorrentFreak, that's exactly what happened last week when Fox filed a complaint under the DMCA.

Fox sent YouTube a takedown notice - asserting that a 2009 clip was illegally copied from their 2016 show - when in fact Fox had copied the original clip -  and YouTube followed the DMCA and removed the 2009 clip - illustrating how the takedown notice system can be misused to create ridiculous results...

The facts are not disputed. In a May 14, 2016 episode of Family Guy on Fox, Peter annoyingly exploited a glitch in a real world 1986 game from Konami called Double Dribble.

After the episode aired, Fox sent YouTube a letter, instructing that OSP to takedown a video that had the gameplay in it.

Fox was asserting they owned the video made and uploaded by a Double Dribble player and fan back in 2009.

Those rights belong to the game company and the player.

In fact, Fox apparently obtained the clip that they used in their Family Guy episode directly "from YouTube where it had been sitting since it was first uploaded in 2009." Arguably infringing the copyrights of others.

How did the takedown notice happen if Fox doesn't own the gameplay clip?

Apparently Fox uses an automated system that compares everything on YouTube to what Fox has broadcast - and the system was unaware that Fox had copied the original Double Dribble clip (without permission?).

In other words, Fox (or at least Fox's automated system?) simply behaves as if everything broadcast on Fox belongs to Fox. So Fox (or their automated system?) was under the impression that Fox owned the gameplay clip just because it had been incorporated into a Fox television show.

And the takedown notice that Fox sent to YouTube?

Not supported by the facts.

But a delay in responding to takedown letters could deny YouTube the safe harbor. So YouTube dutifully took down the original gameplay clip: 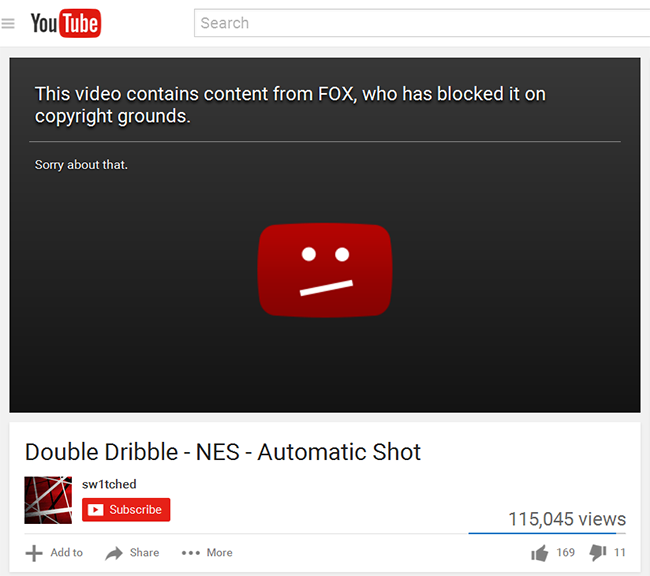 But now (after a few days and some public shaming of Fox) the original clip has been restored on YouTube:

Why did Fox relent so quickly - apparently instructing YouTube to disregard their takedown letter?

The DMCA provides for damages and attorney’s fees for “any person who knowingly materially misrepresents” the facts in a takedown notice.

In other words, Fox claimed ownership of the clip even though they didn't own the clip - and their mistaken takedown letter opened them up to damages and claims for the attorney fees incurred by the party who did own the clip...
Posted by Randy Finch on Saturday, May 21, 2016