For our next class meeting on Friday April 8th, each team of first year graduate filmmakers must turn in a written schedule - based on a "breakdown" of their script.

How should you accomplish this work?

You can assign one producer - or work together as a team - but each team's script breakdown and schedule should proceed using the approach described by Prof. Phil Peters and in the lecture Prof. Finch gave last semester.

For a review of how to begin the breakdown of a script, you can watch the video above. And here is a link to an explanation of how to breakdown and schedule a film:

Even with a short film with only a few scenes, considering each scene of your team's script on its own, and transfering the key production information in each scene - such as cast members, props, the equipment required, etc. - into a database or onto paper is a very good practice.

Once the script it "broken down" this way, each scene is assigned a shoot day.

Even if only one member has done the schedule - all team members should review it and offer their insights before the film is shot (professionals do this in pre-production meetings).

What format should your schedule follow? See the example below. This schedule is one way of breaking down a script. The Hollywood system of scheduling allows for more complexity, but for your short films, the format below is probably sufficient.

The goal of this assignment is to get all the key production information for each scene of your film into a format where each scene can be scheduled and then budgeted.

For class on April 8th, each grad student team must print out a schedule on paper that reflects how your team planned on shooting your script.

The schedule can be in Chinese. But we will discuss it in class in English.

Your team's schedule must demonstrate that your team has learned how to extract information from a screenplay and put that information into a format where decisions about your film's shooting schedule can be made.

Schedules are a key part of the craft of filmmaking. And craft is a large part of what you are learning in film school.

Note: Part of the craft of filmmaking (especially big budget filmmaking) is having the tools (like a comprehensive schedule) that allow a large production to quickly revise a schedule if circumstances require.

For example: If it rains on the day you planned to shoot your most important exterior? It is your schedule and planning that will determine whether everything goes smoothly at your cover set. Experienced filmmakers shoot their exteriors early in their schedules - saving interiors for later in the shoot. But having a rainy day cover set isn't going to be enough if all departments can't easily see what the they need to bring to the cover set to accomplish the scenes that are being shot there.

Every filmmaker at TNUA needs to understand these types of concerns and the tools that each department will use to plan and organize their efforts.

To be very clear: Your team's schedule will be a part of deciding whether you have fulfilled (and passed) this semester's producing requirements. 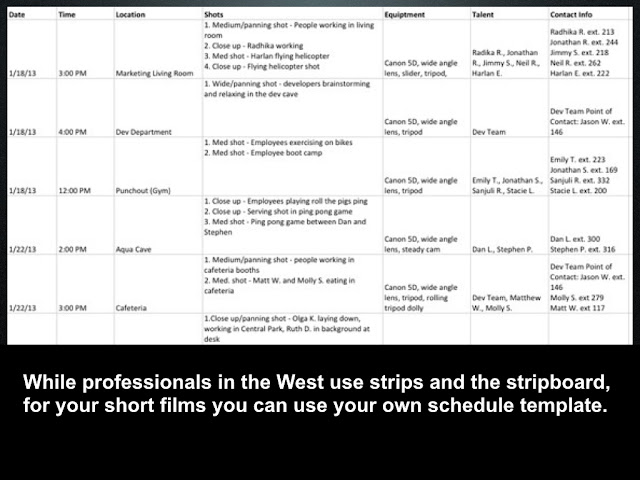 Any questions? Email me (my email address is in the "contact" section in the right hand column of this blog).
Posted by Randy Finch on Sunday, March 20, 2016