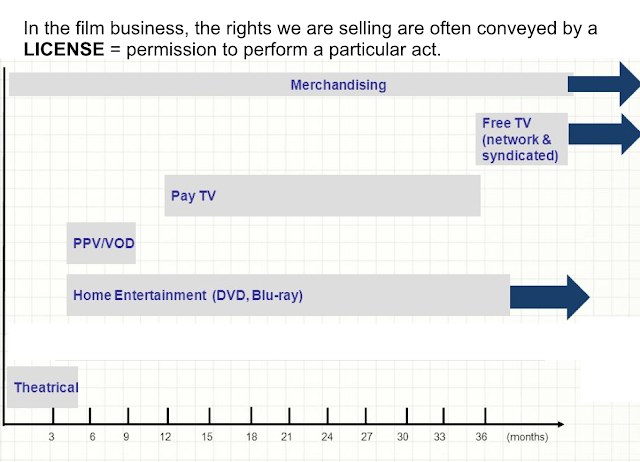 Please follow the link and read the Oct. 2, 2015 IndieWire article by director, producer and screenwriter Ryan Jaffe. See how the film business terms we have discussed in our producing class are useful in understanding the distribution model Ryan Jaffe has chosen for his film "This Is Happening."

If you're unclear about what "day and date" means - here's a link to an October 28th, 2013 article about Netflix (which should be available in Taiwan in early 2016) that discusses how that company is changing the traditional release "windows" by releasing a film on Netflix "the same day they’re opening in theaters."

And, to see how release windows can affect the box office revenue of a film, here is a link to a February 2013 post about how "The Hobbit" stumbled in China.

Just 5 years ago, we all thought DVDs would survive for a time, as streaming gradually became a significant popular format. We were wrong.

In the last 5 years, VOD has stomped the life out of DVDs (delivering the most severe sudden crippling blow back in 2010). Consider how Orly Ravid's 2011 predictions (e.g., worldwide revenue from VOD movies and TV programs will reach $5.7 billion in 2016) seriously underestimated the impact of VOD.

Reality has a way of making predictions by the experts in the motion picture business seem foolish.

Think about how so many of us failed to see how quickly VOD would change consumer behavior when you look at the September 2015 chart by Statista below. That chart shows current and predicted US revenue (not global - just the US) from video and music streaming and downloads. While the Statista 2014 and 2015 numbers seem accurate, can we trust their predictions?

You will find more statistics at Statista
Posted by Randy Finch on Friday, October 02, 2015