According to a recent National Science Board (NSB) report, "China continues to exhibit the world’s most dramatic R&D growth pattern."

China’s share of the world’s high-technology manufacturing has ballooned from 8 percent in 2003 to 24 percent in 2012.

And, while the growth of low-wage manufacturing may be slowing in China, China’s rate of growth in new patents and hi-tech manufacturing is not matched by any other country's - which has lead the chair of the NSB, Dan E. Arvizu, to predict (in a Feb. 6th, 2014 conference call) that China will overtake the U.S.” in high-tech output “in the near future.” 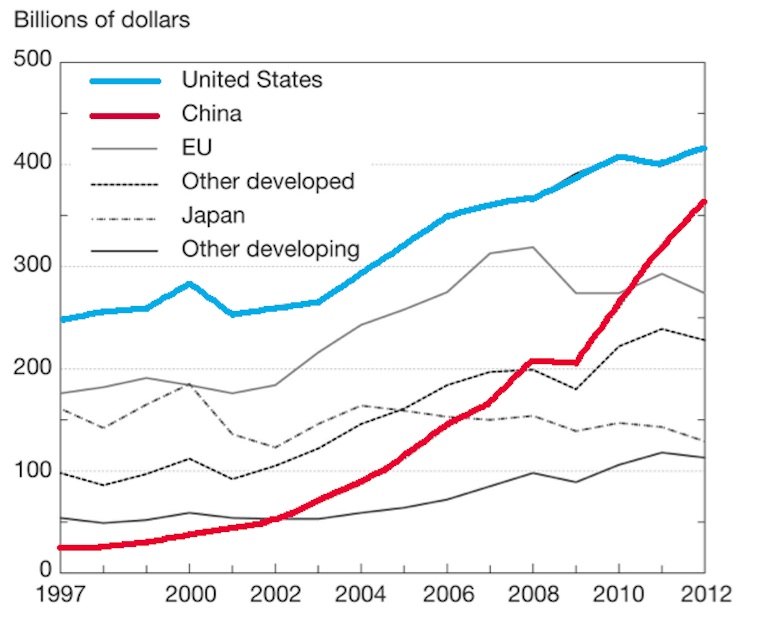 And it isn't just in high-tech industrial production where China is making progress.

As described by David Wertime in a February 6th, 2014 post to Foreign Policy, the ability to design and innovate may also be tipping in China's direction:

By way of contrast, US universities awarded 1.2 million undergraduate degrees in 2000 and that number increased to about 1.6 million in 2010. (And there is evidence that US higher ed enrollment may have peaked, with the number of students enrolled in American higher education dropping by more than 400,000 from 2011 to 2012 according to Census data. )

And China's emphasis on increasing the numbers of educated 21st century business leaders and tech innovators includes a plan whereby 17,000 post-doctoral fellows will enroll in China's major research institutions in 2015.

The explosion in university training in China, by itself, doesn't mean that China will suddenly have a generation of innovators and entrepreneurs on a par with Zuckerberg, Gates and Jobs.

The confluence of many factors - including the booming Chinese audience for motion pictures in theaters and online (the number of people watching video online in China increased 83.8 percent in 2013, from a reported 112 million people in 2012 to 247 million people in 2013) - will necessarily have an impact on 21st century film history.

As in the 20th century, the art of 21st century filmmaking may be built on tech innovations that require an educated corps of nerds engineers.

In the 20th century, the US educational system created entire disciplines devoted to improving audio-visual communication technologies - while accepting many talented exiles from Europe, who also made significant contributions to film technology.

In the 21st century that role (as home for tech innovators) may fall to China. For example, the NSB is reporting that 31 percent of Chinese undergraduates currently leave their universities with a degree in engineering: while, in the United States, that figure is just 5 percent.

In short, China is currently far outpacing the US in creating young professionals capable of entering the workforce with skills suited to high-tech research, manufacturing and innovation.

It's difficult to compare the way China prepares tomorrow's homegrown tech innovators with the way things have been done in the US. The Chinese system of education is famously competitive. Each year, over 10 million 12th graders take China's National College Entrance Exam (高考 or gāo kǎo) to compete for one of the 7 million seats at universities. And the competition to gain access to one of the million openings at the most prestigious "first category" research universities is even fiercer.

Preparation for the 高考 is notoriously focused on rote memorization. And testing performance (a poor score often means giving up on any prospects for higher ed) matters more in China than one solitary test score does almost anywhere else in the world.

It's true that students and many education experts complain that China's testing system fails to reward creativity or critical thinking. But the economic rise of China and the sheer number of students being exposed to high-tech disciplines at the university level in China may outweigh these problems.

If only the top 5% of China's engineering students are getting world class educations, that's still more students than are graduating with engineering degrees in the entire US.

While the system of selecting and training tomorrow's tech innovators in China might stand improvement, a fundamental shift in who will be sponsoring and rewarding innovation is undeniably underway.

After all, tech innovators from anyplace on the earth can be wooed to work for the highest bidder. And China's internal market for tech products in exploding just as China is turning out 20 times as many engineers as the US - its biggest competitor.

Everyone agrees that China will soon be leading the world in high-tech production - the only question is whose passport will tomorrow's innovators be carrying.

Clearly China will continue to grow as a (the?) center of tech innovation for the world - and products (including motion picture content) for the Chinese market that rely on tech innovation will clearly grow in importance in the coming years...

So what does the rise of technology created by Chinese companies (and increasingly sold to Chinese customers) mean for 21st century filmmakers?

It means that an understanding of Chinese culture (e.g., stories, fads, cinema history, what films get supported by the government, etc.) - coupled with an understanding of the new platforms and technologies - may well be fundamental aptitudes for success in 21st century filmmaking.

We are still at the beginning of a worldwide explosion in the number of mobile devices that are capable of playing motion pictures from the internet (see the chart from Cisco below). There are many indications that China will play a leading role in making these new devices. Filmmakers who want to prosper in the 21st century may well want to consider what sort of motion pictures will work on these devices, what sorts of motion pictures will work in China and other rapidly expanding markets, and how will content creators be compensated?

Thank you for the wonderful publication. With great pleasure I read. Also I want to say that the site https://set-travel.com/en/blog/item/10729-the-most-famous-ural-mountain-of-russia-is-the-kosva-stone is one of the best web resources for travelers