That was the year after Mao Zedong's death (September 1976) and the arrest of the Gang of Four (October 1976).

Student's of Chinese history will remember the role that Jiang Qing, Mao Zedong's widow and a former movie starlet, played in the Cultural Revolution.

Here's a photo of Jiang Qing (before she became Mao's wife) from the 1930s: 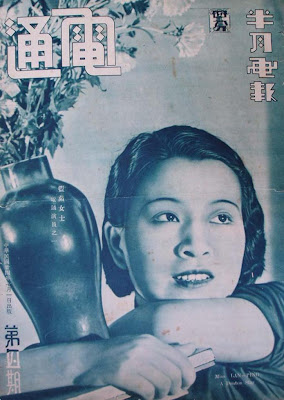 During the so-called "Cultural Revolution" (which convulsed China from 1966-1976, the ten years that preceded Mao's death), Jiang Qing served in the Central Cultural Revolution Group. As a former actress and Mao's wife, she had enormous influence in determining which films could be made and screened in China. Starting in 1966, almost all the films produced prior to the Cultural Revolution (made inside China or out) were banned. The total of Chinese films produced during the Cultural Revolution period (1966-1976) dropped to around 70. Films made for purely commercial or artistic purposes were not supported. Madame Mao championed politically inspirational stories - where the good guys were predominantly farmers, workers and revolutionary soldiers, and the bad guys were landlords and anti-revolutionaries. This era of "revolutionary realism" in Chinese cinema lasted until Mao's death and the arrest of Jiang Qing as one of the Gang of Four.

Mao's widow was put on trial at the end of 1980 along with three of her ideological allies for crimes committed during the Cultural Revolution.

After 1978, a slow process of modernization began to transform the Chinese film industry.

While the socialist model of distributing films through a centralized system remained in place (starting in 1950s, China had instituted a film distribution network, whereby the central China Film Corporation purchased films from studios and made those films available to Provincial, City and County corporations that controlled distribution and exhibition on the local level), new ideas about how to make and distribute successful films began to take hold.

In 1980, the head of the Beijing Film Studio wrote a letter to the Central Office of the Secretary of the Communist Party advocating for self-responsibility in the film production corporations (a change from the the centralized control over production still exercised by  the China Film Corporation). Later that year, a forum was convened in Beijing (Forum on Film System Reform - August to November 1980) that suggested the major Chinese film studios could implement "independent economic calculation, payment of taxes to the state, and self-responsibility for the losses, under the direction of the state planning."

These ideas, about moving some of the film production risks and rewards to the studio level (which would have allowed more independence to the Beijing, Shanghai, Zhujiang, Xian, and Emei Film Studios), were not immediately implemented. But some smaller reforms started to take hold. For example, in 1980 the price of distribution rights (which had been set by administrative order at 700,000 yuan for all color films - in other words, no matter how popular the film, the studio could only get that fixed amount from the China Film Corporation) was reformed to reflect popularity. Starting in 1980, the 16 state-owned film studios in China could charge for the actual number of prints of a particular film ordered (i.e., the new set price for a film was 990,000 yuan, but additional prints over 90 copies could earn an additional 9,000 yuan each, although the central authority also dictated that the price for any one film could not exceed 1,080,000 yuan).

This centrally-managed system of film revenue remained in place from 1980-1986. Political censorship also remained in place, although some films of this period managed mild criticisms of the post-Cultural Revolution state (e.g., At The Middle Age, dir. Wang Ximin, 1982).

In 1984, the Third Plenum of the 12th Congress of the Chinese Communist Party Central Committee instituted another round of reform that would have far-reaching consequences for the Chinese film industry. It was this plenum that advocated for a "socialist market economy," which set the stage for film studios and exhibitors to be treated - at least in theory - as "enterprises" and not as "public institutions." In other words, the reforms of 1984 (even though not immediately fully implemented) set the stage for Chinese studios to retain profits, absorb losses, pay taxes and borrow money from banks.

After the Cultural Revolution, even despite inroads from TV and radio, the number of films produced in China had ballooned from 20 in 1977 to 143 in 1984.

Starting in 1986, the Chinese film industry entered a period (now under two ministries) where film production business opportunities were allowed to slightly expand, even as political concerns and theatrical exhibition policies were still closely managed by a central authority.

By 1992, the China Film Corporation remained the sole purchaser and distributor of Chinese films - even as some Chinese studio heads were beginning to exercise some very limited autonomy in 1) selecting what films would get made, 2) determining how their films would be financed, and 3) participating in the risks and rewards of their choices.

In January 1993, China's Ministry of Radio, Film and Television published a document that fundamentally reshaped China's film business. The central proposal of that document, "Suggestions on Deepening the Chinese Film Industry's Institutional Reforms" also known as Document 3, was that film studios should no longer have to go through China Film Corporation, but could deal directly with the exhibitors.

The reforms of Document 3 came in the nick of time. Under centralized control, China's film industry was in danger of collapse. The major studios were deeply in debt in 1992 and local production capital (except for government money for propaganda films) had all but disappeared. Local films were strictly low-investment / low-return. For example, the most expensive film made in China in 1992 was budgeted at 1,500,000 yuan (around US $187,500).

With no money to invest in local productions, the Chinese box office in 1993 was dominated by co-productions from Taiwan and Hong Kong.

In addition to a crisis in the state -controlled film business, the end of central control in China's film business was also the direct consequence of the Fourteenth Party Congress, that had met in October of 1992 and had unambiguously committed China to a market economy.

After the Fourteenth Party Congress and Document 3, Chinese film studios (each in their own way) began to dismantle much of the prior system: Changes included revising employment practices (e.g., downsizing, linking bonuses to film performance, etc.), opening up to increased co-production (e.g., Farewell My Concubine, dir. Chen Kaige, 1993) and making print prices subject to market forces.

That all changed after Jackie Chan's Rumble in the Bronx (dir. Táng Jìlǐ aka Stanley Tong, 1995) was released in China at the end of 1995. Rumble in the Bronx set box office records in China and established a precedent for four more Jackie Chan films that would become a staple for the Chinese New Year holidays - First Strike (1996), Mr. Nice Guy (1997), Who Am I? (1998) and Gorgeous (1999).

The stage was now set for the first entirely domestically-produced New Year's mega-hit of the modern Chinese era - the satirical comedy Party A, Party B (dir. Feng Xiaogang, 1997) which opened in China on Christmas Eve 1997.

Knowing that Jackie Chan owned the holiday, Party A, Party B was in Chinese theaters more than three weeks ahead of Jackie Chan's latest, Who Am I?, which was scheduled for release on January 17th, 1998.

From its very first frames (an animated tiger wishing the viewer a happy year of the tiger), it was clear that Party A, Party B was designed to make a mark in the newly established New Years' holiday box office bonanza.

Even though Party A, Party B made absolutely no impression in the West, it was the first Chinese-produced film to tap into contemporary Chinese social issues and carve out a significant number at the New Years' box office. Like many subsequent domestically produced hits, Party A, Party B focussed on issues of domestic relevance - in this case entrepreneurship and the sometimes outlandish dreams of everyday people - in ways that resonated deeply with a Chinese audience. It was not a Hollywood style blockbuster, but Party A, Party B established that a modestly budgeted locally-produced film - if it reflected issues in contemporary Chinese culture in entertaining ways - could succeed in Chinese theaters.

That was the start. And since 1997, the domestic Chinese film business has continued to build - with China producing over 500 films in 2013 with a cumulative box office that topped US $ 3.5 billion.

I always use this site to watch my favorite movies https://viooz4k.net/ I like it and you can use it just perfectly