Like the revenue sharing that occurs in the West on YouTube, Youku's 4 month old revenue sharing allows qualified participants to earn money generated from advertisements embedded with the content they upload. If you're a creator - or own the rights to content you'd like to exploit on Youku - and you're interested in signing up, here's a link to Youku's homepage for revenue sharing.

Is signing up for revenue sharing with Youku worth the effort? (I've written here about how a great many YouTube creators are currently unhappy with the share of profits they're receiving from YouTube for the ads that accompany their videos. Is Youku any better?)

As reported in Reuters on October 30th, 2013: "Top video creators [on Youku] have [in the 4 months that the program has been in place] earned between US$3,500 and US$10,000 per month from diverse content such as education, humor, games, animated commentary. Other content includes web serials from comedians, musicians and original productions."

While those numbers are small, they may point to the beginning to a real business for web distribution of user-generated motion pictures in China. So far, as Reuters reports, the success stories for user generated content on Youku are very modest:

"Li Hongchou, who started creating web serials a few years ago while in college, is the top monthly earner so far at more than 80,000 RMB, or about $12,000, for a few consecutive months. His first hit web serial, Off-Campus Roommates, was about young people living together in an apartment, similar to the American television series "Friends." Li now has his own studio and has produced more than 300 web episodes, netting nearly 300 million cumulative views."

As I written on this blog before, China is just at the beginning of a mobile internet revolution - and that new video connectivity will change the global movie business - not just how motion pictures are seen (more and more on mobile devices) but also how movies playing in theaters are discovered.

The high speed phone networks and devices that enable connecting wirelessly to video content are not yet ubiquitous in China - but that is changing.  (For a sense of how tablets may be a huge part of the future of connectivity in China, we can look at recent trends in Russia, where tablet use is exploding.) And the revenue from online video in China is predicted to grow at an astounding rate: 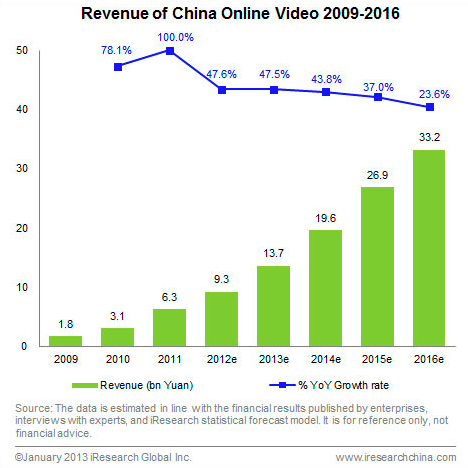 In May of 2013, China’s two top mobile video sites (in terms of time spent viewing) reported on their user-bases - and the results suggest a stunning period of growth for mobile connectivity is already underway: In May, Youku Tudou (the parent company of Youku - NYSE:YOKU) reported 150 million daily mobile viewers on Youku and Baidu (owner's of China's largest search site Baidu.com - NASDAQ:BIDU) reported that their video streaming site Qiyi.com, that focuses on licensed Chinese TV series and movies (think Hulu in the US), had 200 million monthly mobile viewers.

The switch to mobile will pick up enormous momentum when China Mobile - the mainland's leading telecom - begins offering 4G-LTE to all its 700+ million customers. That process is already underway. In anticipation of the switch to mobile, and what I see as an inevitable explosion in the use of inexpensive (under US$100) tablets for watching content that in the 20th century might have been viewed on a traditional TV, Youku is already adapting their platform to make mobile the focus of their online video business.

For example, as reported in TechInAsia:  In February of 2013 Youku added QR codes to its desktop website to assist users in finishing a video on a mobile device. Then in July 2013, Youku launched a partnership with Sina Weibo, China’s most used social site, to coordinate video content promotion on Weibo. Perhaps most significantly, in June 2013, Youku revamped their interface - moving to a more minimal Youku front page and eliminating the different mobile homepage [With apologies to J.R.R. Tolkien, Youku now has one interface to rule them all, one interface to find videos (whether you're on a tablet, phone or desktop), one interface to bring all of China their online video and - in the New World of mobile connectivity - bind them more efficiently to spreadable content and advertising messages.].

Thanks to Tan Siok Siok, creator of Twittamentary, for inspiring this post.
Posted by Randy Finch on Wednesday, October 30, 2013