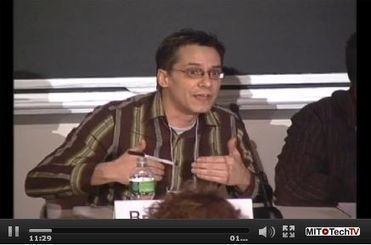 On May 2, 2011, Brian Clark posted to Facebook (of all places) an essay that is becoming something of a landmark in the lively discourse on "What is transmedia storytelling?"

As Brian observes: "In any field, practitioners develop a specialized jargon that conveys either the complex nuance or razor specificity necessary for people to talk about what they do with each other. It is good for everyone to be involved in the debates about those kinds of terms of art on at least some level, as the dialog advances new ways of thinking about the work..."

As some of you may know, Brian was writing in the context of a spate of posts attacking the term "transmedia" and how it was being applied to certain (too many?) projects.

As Brian writes, attacks on creators over what is and what is not transmedia (e.g., "your work isn't transmedia, it's just franchising a story onto another platform") may be forcing us practitioners to think more clearly about our processes. But tearing down someone else's work (e.g., "my work is better, more informed, more pure, more transmedia than yours"), as a colleague has recently done to my work on plantcitystories.com, is not helpful: "We need to be able to discuss this without people taking that as a rebuke of their work or, conversely, worrying more about their own promotional positioning than the health of the movement."

According to Brian, part of the problem may be that there are currently two different approaches that are sharing the term "transmedia":

"The West Coast transmedia tradition is largely what [USC Prof. Henry] Jenkins was studying, and that style might be best personified by people like Elan Lee, Jordan Weisman and Jeff Gomez. It thinks more in terms of franchises, it has struggles with the relationships with the owners of the industry, and starts from the perspective that creators won’t own the IP they are creating. They want to fix the studio system, or recreate a new kind of studio.

The East Coast transmedia tradition is quite different and emerges far more from the independent traditions of media through people like Lance Weiler, Michael Monello, and I. It thinks in terms of one story told across platforms, it has struggles with monetizing and financing, and starts from the perspective that creators own the IP they are creating. They want to extend an existing community into transmedia, or recreate a new kind of community."

Based on this observation, Brian Clark continues: "Whether you’re practicing East Coast or West Coast transmedia, the issue is about creative control: if you don’t have control over the design of the story and its distribution channels, you’re simply not able to reach that higher bar of telling that one story across numerous channels and you’re back to extending or adapting. You’re not a transmedia storyteller, you’re doing something else while utilizing the methods of transmedia... If creative control is the unifying goal, then we should reserve the phrases "transmedia story" and "transmedia storyteller" to when it passes some tipping point towards having an important creative voice in the core story rather than just when someone has helped adapt or extend someone else’s story onto a new platform. And I say that as someone who frequently is adapting or extending someone else’s story … or whispering in the ear of the primary storytellers about the things they could do as storytellers beyond just extending and adapting."

These excerpts from Brian's post will give you the gist of his argument, but I strongly urge you to click on the link and read the entire post. Fascinating stuff.
Posted by Randy Finch on Tuesday, November 22, 2011