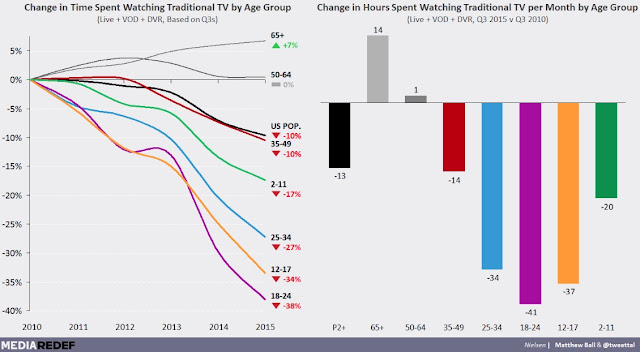 Take a look at what is happening.

The chart above shows hours spent watching TV by age group in the US.

And, despite robust numbers for the 2016-2017 upfront ad market (the springtime ritual, where the US TV networks sell ads for their new seasons), young people seem to be turning off their TVs. And, with young people switching their viewing to mobile devices? Well... the prospects - over the next few years - for traditional TV revenue from interruptive ads are beginning to look bleak.

Notice in the Neilsen chart above in particular how millenials - the crucial demographic for brands looking to build lifetime loyalty - are deserting TV.

These numbers, and a few other choice insights, are behind a Tuesday June 21st, 2016, Ben Thompson blogpost  that predicts an imminent collapse for the US TV ad sales market:

"[T]he inescapable reality is that TV advertisers are 20th century companies: built for mass markets, not niches, for brick-and-mortar retailers, not e-commerce. These companies were built on TV, and TV was built on their advertisements, and while they are propping each other up for now, the decline of one will hasten the decline of the other."

What is the core message (the unique selling proposition?) of Ben Thompson's argument?

Let's start with one example. A large share of US TV ads are currently being purchased by the big box stores. Think WalMart and Target. But what if WalMart and Target stumble? Like others (myself included), Ben Thompson sees Amazon - with its rapidly growing foothold in groceries and consumables - disrupting the big box stores in the US: "[B]ig box retailers that offer little advantages beyond availability and low prices are being outdone by Amazon on both counts. In the very long run it is hard to see why they will continue to exist."

And, if you look at the list of the 25 companies that are still investing heavily in US TV advertising - a list that includes consumer packaged goods makers, automotive giants, big pharma, financial services companies, and big box retailers - many are vulnerable to disruption... precisely because they've built their dominance on mass market TV advertising and the brick and mortar retail chain of "scale logistics, inventory management, store development, etc."

While TV ads continued to be solid on Madison Ave. this year, we've undoubtedly entered the age of niche marketing, big data, and same-day delivery.

So let's see exactly how major US TV advertisers - like WalMart, Target and Macy's - weather that storm.

It's true that certain big TV advertisers (e.g., America Express, JPMorgan Chase, Bank of America, Capital One) aren't as vulnerable to the disruption as the packaged goods companies (e.g., Procter & Gamble, L’Oréal, Johnson & Johnson) that currently jockey for attention on US TV screens. But "private label" brands that are targeted to niches using big data (even in service industries like banking) are coming - and they favor a move away from traditional TV and toward ads on mobile devices.

Some of us expect a collapse of traditional US TV ad revenue as retailing continues to evolve online and advertisers realize that younger consumers have switched to mobile devices.