When I Helped Andy Warhol to Create a Poster

Back in 1982, Andy Warhol agreed to create a poster for a play that "Baby Jane" Holzer co-produced and that I company managed. Somehow it fell to me to arrange things with Andy: Including going to Andy's Factory about a week after our photo shoot and being presented with a stack of over 50 finished posters - all based on the same photo - but each in different colors of ink and paper. This is the room, on the North side of Union Square, where the posters were piled up... 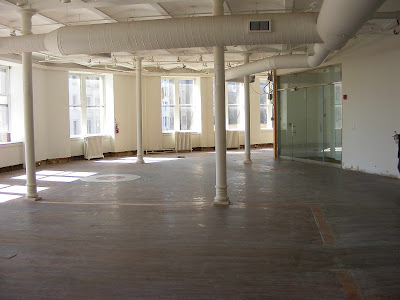 I stared at the pile.

These were original Warhols. Worth thousands. Maybe hundreds of thousands.

A disinterested assistant told my buddy Chris and me to choose.

Just one? I asked.

It was 1982 - but the whole experience is seared in my memory as if it was last week. We didn't take any pictures of Andy when he came to take pictures of us, but I'm pretty sure that's the camera Andy used when he appeared at Martha Swope's studio with his black-clad assistant.

I know they arrived at the end of Carol Rosegg's shoot and that Andy and his companion each had an identical black point-and-shoot camera. As Carol finished up with the 2 costumed actors - Andy and his shadow walked onto the white cyc. Without telling the actors anything, Andy and the other man took up positions next to each other standing shoulder to shoulder about 5 feet away from their subjects. Then they wordlessly lifted their little cameras and began alternately leaning in and firing off photos each from the same spot as quickly as they could. All without saying a word. It was over in about a minute. That's how they got the photo that became the poster that Chris and I eventually chose.