What's Popcorn Time and Why Does It Alarm Netflix's Reed Hastings? In a January 20th, 2015 letter to shareholders (that accompanied a bullish earnings report after a major stock price collapse in October), Netflix founder and CEO Reed Hastings and his CFO David Wells warned of a significant threat to their online motion picture streaming service: "Piracy continues to be one of our biggest competitors."

In particular, Hastings and Wells expressed concern about a service known as Popcorn Time, a portal that helps users to stream illegal copies of motion pictures and TV shows for free.

Originally developed by a coder from Buenos Aires, Popcorn Time is "basically a browser that users HTML, CSS and JavaScript to serve the movie [torrent] streams" employing "sequential downloading and uploading to play films in its media player."  In other words, the Popcorn Time service provides a user-friendly video player where anyone who wants to can search for and stream movies (from torrent sites) without a subscription or a bill.

Movie fans, who wouldn't ordinarily patronize a shady torrent site (where illegally copied content can be found), might find the cute graphics, access to free content, and easy to navigate Popcorn Time app much more inviting.

In late March 2014, the Popcorn Time service abruptly shut down - having only been active for a few weeks. It has since been revealed (via the Sony Hack) that the MPAA may have been behind that shutdown: The MPAA claimed in a (previously private) letter to studio heads that they had “scored a major victory in shutting down the key developers of Popcorn Time.”

But that wasn't the end: After the original developers were out of the picture, Popcorn Time re-emerged. In July of 2014, the MPAA went after the repositories for a variety of Popcorn Time applications. And those too were shut down. Then in October of 2014, another Popcorn Time domain name, Time4popcorn.eu, was shut down.

Still (as of January 2015) it appears that the Popcorn Time app lives on - taken up by other coders.

So what in particular is causing major media execs to concern themselves with Popcorn Time?

Unlike the legal services, Popcorn Time apparently never obtains permission or pays anything to the creators of the content that streams. And Popcorn Time makes finding and copying a movie or TV show as easy as using Netflix.

Critics of the studios say that they bear some responsibility in creating a market for illegal content - as they build global demand with their marketing while many movies and TV shows are unavailable in key markets. And it is true that global demand for content online is growing - even as the systems for providing legal online access are not yet global. That's one of the reasons that Popcorn Time potentially has a much larger library than any one legal service. Unlike Netflix, Amazon or Hulu, popular shows won't disappear at the end of a license period in one territory while being available in another. Similarly, content that is unavailable legally in one region - but that can be legally obtained in a digital format in another territory- has a tendency to show up on Popcorn Time. But none of that excuses the illegal copying and sharing that Popcorn Time (and similar apps) encourages.

And, as seen in this Google Trends chart (below), from Jan. 2014 to Jan. 2015, Netflix has reason to worry: There was a sharp rise in searches for Popcorn Time relative to Netflix and HBO in the Netherlands. 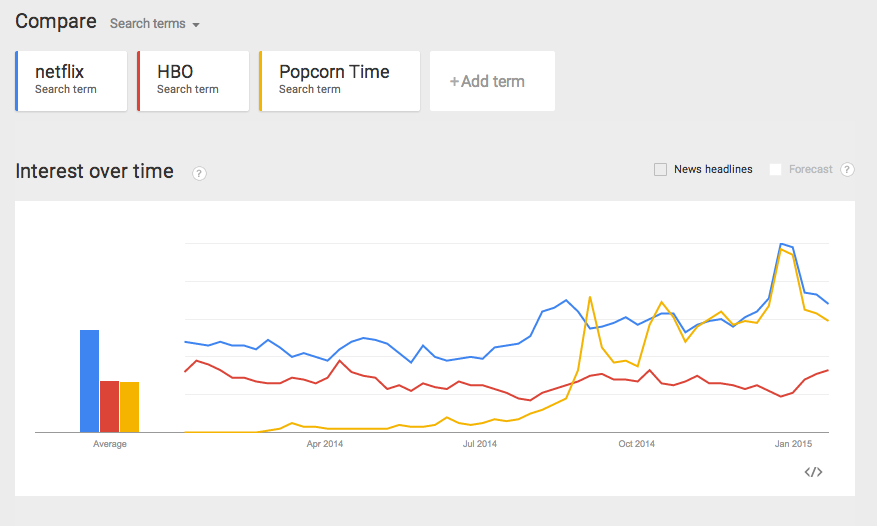 While Popcorn Time isn't yet a worldwide threat to Netflix (see the Google Trends chart below, that compares searches around the world for the last year, showing that Popcorn Time hasn't developed into a big deal for Netflix globally), Reed Hastings and David Wells are sounding the alarm now. Let's see how the authorities in the relevant jurisdictions respond. 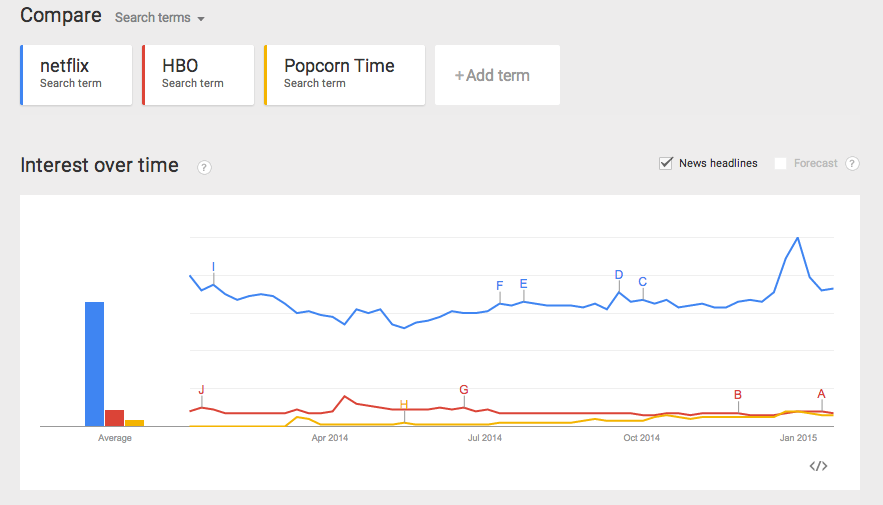