Why Tepid Hollywood Comedy "Bride Wars" is Being Remade in China

Or at least that seems to be the thinking behind China's Bona Film Group's remake of director Gary Winick's 2009 Fox comedy Bride Wars.

Although the original Bride Wars didn't set the world on fire - grossing under US$60M in English-speaking North America, and even less in foreign theaters, and earning a dismal 10% on review aggregator rottentomatoes.com - the booming Chinese theatrical market needs serviceable scripts targeted at a young female demographic.

So, over the summer of 2014, director Tony Chan shot a Bride Wars remake in Shanghai, starring Chinese pop idols Angelababy and Ni Ni in the roles first played by Kate Hudson and Anne Hathaway. 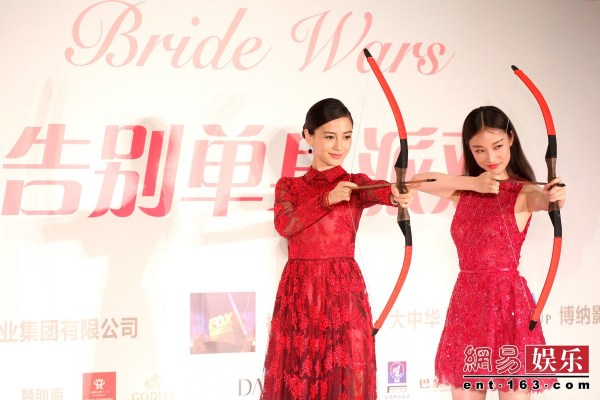 Why remake a Hollywood also-ran?

Even though there are millions more young men than women in China today, the theatrical motion picture business in China has seen Chinese films that cater to young women (like 2013's So Young) stand up at the box office against the toughest of Hollywood competition (e.g., Iron Man 3).

Why are modestly budgeted local films about young women overcoming rather prosaic problems (prosaic at least by Tony-Stark-encounters-an-enemy-whose-reach-knows-no-bounds standards) working so well in China right now?

Young men and women are moving to urban centers in China by the tens of millions each year. The traditional ways of making a living, falling in love and settling down have been disrupted. And, in every city, shopping malls - with glittering new multiplexes - are going up. The crowds that fill these malls and theaters include many young female workers - newly independent 20 somethings eager for comedies about young women struggling to make a better life.

It was inevitable that Hollywood would take notice.

Buckets of money earned by fish-out-of-water and rom-com genres?

Genres that veteran Hollywood execs and screenwriters know how to develop?

Genres that have been passed-over lately by the studios in favor of superhero tentpoles?

While mid-budget fare has been dying in tinseltown, the Bride Wars remake in China may provide a glimmer of hope to Western romantic fantasy feature film writers who've recently been jilted (left at the altar?).

Let's see how Bride Wars fares at the box office in China in 2015.

Perhaps genres requiring a relatively small investment that nobody wants right now in Hollywood can prosper in China?

Which genres will prove the most profitable in China in the coming years?

Will US style rom-coms remain a part of the mix in China?

The producer of the Chinese version of Bride Wars is Bona Film Group.

Perhaps a look at Bona's recent releases might be helpful for predicting the future of the Chinese theatrical film business?

Bona Films has had a very good year - taking 3 of the top 14 spots in China's summer (May through August) 2014 box office derby with The Continent (fourth in China's overall summer box office) followed by The White Haired Witch and Overheard 3.

As COO Jeffrey Chan observed in Bona's Nov. 13th, 2014 conference call with investors and analysts: "The Continent was the company’s summer box office leader at RMB628 million (US$102M), followed by The White-Haired Witch with RMB319 million (US$52M). These two films were key revenue drivers in the third quarter and their performances were in line with our expectations, in terms of their wide audience appeal and result of our aggressive promotional effort."

But the competition in China's film business is clearly heating up.

Jack Ma of Alibaba (which coincidentally reported US$9B of retail sales on Tuesday Nov. Nov. 11th, 2014 - the shopping event known as 光棍节 or Guānggùn Jié or "Single's Day" in China) is sitting on an enormous pile of cash following his record-making IPO.

The speculation about whether Alibaba intends to use some of the US$25B raised on Wall Street to buy a Hollywood studio - or a library of Western content - and how that might impact the competitive landscape for motion pictures in China - was on the minds of analysts participating in the Bona conference call.

Mention was also made on the Nov. 13th, 2014 Bona call of the Wanda Group's dominant position in theaters. As of Nov. 2014, Bona owns and operates just 22 movie theaters with 182 screens in the mainland. At the start of 2014, Bona's competitor, Wanda Cinema (also a producer of films), owned seven times as many theaters in China - as well as a controlling interest in the second biggest movie theater chain in the US. And Wanda was not letting up - contracting with Imax to build another 200 giant-format theaters in China by 2021.

What else was discussed?

"The total China box office is expected to grow nearly RMB8 billion (US$1.31B) more than last year reaching close to RMB30 billion (US$4.89B - which is less than one-half of the box office of US$10.9B reported in English speaking North America in 2013, but US box office seems to be in decline, while China's box office has been growing at around 30% each year)."

"Going forward Bona is going to focus on two key areas, local films and Hollywood films... [In addition to local films] Bona is planning to invest in and produce some Hollywood mainstream film and attract excellent production talents."

"The first of the five production projects between Bona and Fox International, Bride Wars is scheduled to be release [sic] in 2015. This young romance comedy is directed by Tony Chan and stars China most popular young actresses Angelababy and Ni Ni. The film adapts the proven story structure and is set after the successful 2009 Fox Comedy of the same title and is tailored to the taste of today’s young domestic Chinese audience. We believe that this new film will ride on the growing popularity of the genre in China to become a big crowd pleaser."

Note: I've also written about Bona before. If you want some background, my Sept, 13th, 2013 post on this blog might be a good place to start.
Posted by Randy Finch on Friday, November 14, 2014

Hello. Thank you for the interesting post. I read with great interest. I also want to say that relatively recently I was also interested in such a question. Actual information on this topic found here https://promdevelop.ru/news/biznes-i-kompanii/ I recommend reading. Thank.