Should I Buy the iPhone 6? Apple or Android? In China, the Choice is Clear

In China, (after the Ministry of Industry and Information Technology failed to grant Apple permission to market the iPhone 6 on Cupertino's chosen Sept. 19th release date) the top-of-the-line mass-market new phone as of September 19th, 2014 is unquestionably the Xiaomi Mi4.

Even when the iPhone 6 and iPhone 6 Plus finally become available in China - after Xiaomi has had a chance to study, tweak and arguably outperform what Apple's mobile OS has to offer with their own MIUI skin for Android 4.4.3 (KitKat) - the Xiaomi Mi4 phone will likely match up very well. And at a significantly cheaper price point in the Chinese market.

Basically, the Xiaomi Mi4 is a world-class phone with a constantly updated interface reminiscent (copied from?) Apple's, that matches up very well with the best phones currently on the market (e.g., slightly larger screen than the iPhone 6 with 1920 x 1080 pixels, unlike the iPhone 6 - the ability to record 4K video, great build quality, a 2.5GHz quad-core Snapdragon 801 and 3GB of RAM, an OS that is even faster than standard Android, a much lower price than Apple comparable devices, etc.). 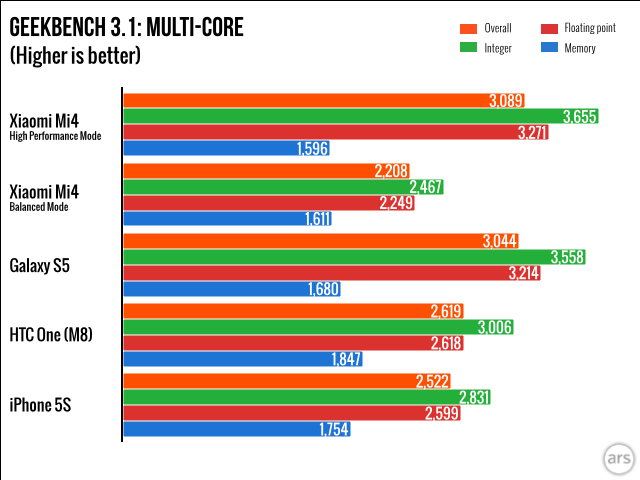 How is Xiaomi able to build world-class devices that outperform other devices and radically undercut Apple's prices in China?

Apparently Xiaomi's business plan for the Chinese market (unlike Apple's) is to sell their phones and tablets for close to cost - and then make money from software (Xiaomi's store is known as the Mi Market).

Because Xiaomi doesn't do business in the US, many well-heeled Westerners will prefer to own the iPhone 6 - or perhaps an LG, HTC or Samsung Android phone. That makes sense. To my knowledge, Xiaomi doesn't have plans to build a 天才吧 - "genius bar" - in my local US mall.  And, while Xiaomi has plans to improve connectivity with Western cellphone systems (international LTE support is promised for later this year), most Americans won't want a phone where the ecosystem for the operating system and the app store is in Chinese.

(But it's worth noting that all Google's English language offerings apparently can be accessed - although it's not clear to me that the current work-around is kosher - through an app from the Mi Market called "Google Installer" that offers a list of Google apps you can install on your Mi4, even if those Google Apps and the Play Store weren't preloaded on your Chinese Mi4. Versions of the Mi4 sold in India and elsewhere - see the video at the very bottom of this post - may have more Google stuff pre-loaded, so your experience may differ.)

Even if you're not in the market for a new phone, a feature by feature comparison of Xiaomi's Mi4 and Apple's new iPhone 6 or 6 Plus leads to one final fascinating insight into the shifting world market for mobile devices.

Wondering why Apple bought Beats and is pushing into wearables - like the Apple Watch?

I suspect that competition from Chinese phone and tablet makers, like Xiaomi, is helping to push Apple  - and therefore all of us - into the new era of wearable devices.

Thanks to Wiley Hausam of Stanford Live and the Bing Concert Hall for asking the question that inspired this post.

Finally, here is another - more detailed user review of the Mi4: