If You Think Groot is Dead.... Spoiler Alert: Groot Has Apparently Been Killed on Many Occasions But Each Time There Have Been New Sprigs

Once again, Prof. Jon Taplin of USC has written about the "The Day The Music Died."

This time Prof. Taplin links to an Aug. 26th, 2014 post by Paul Resnikoff built around a (hyperbolic?) visual aid created by the "antipiracy" reactionaries at the RIAA, the recorded music industry trade group. Take a look at the frightening illustration below: 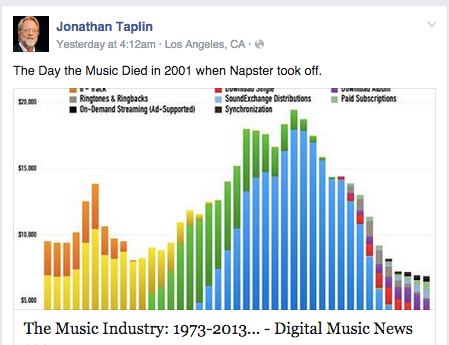 But did the music really die?

And is Napster really to blame?

Or is something more complex happening?

Something that the RIAA illustration above fails to reveal?

I realize it won't be popular with the small group of people who once made millions from multi-platinum albums (or got to hang out with them like Prof. Taplin) but - unless you're still mad because you no longer get to fly to gigs on a jet with your band's logo on the side - or you enjoy wearing sackcloth and ashes - you might want to consider the stats just published (Sept. 23rd, 2014) by Frank Rose:

How can the RIAA illustration above and Frank Rose's stats both be true?

"[Y]ear after year, more and more songs became hits, even as the average size of those hits kept shrinking."

Yes, the biggest selling acts today are not selling anywhere near as many physical copies as some acts used to back in the 70s.

And simply relying on the long tail is not a viable business strategy.

But the music has not died exactly either.

Instead (as Frank Rose explains) "smaller hits tailored to the tastes of specific audiences" are still selling - even if in aggregate the revenue from physical copies is declining.

It isn't the same old music business, and if you're looking for (mobbed up?) promotion people pushing certain records into the stratosphere - today isn't your era.

But does a decline in artists able to afford their own jets really equal the end of music?
Posted by Randy Finch on Thursday, September 25, 2014