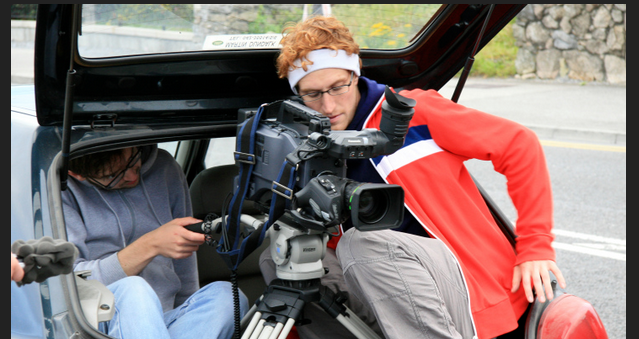 This July, I will lead a team of filmmakers to shoot, edit, and then screen a 90-minute feature length film in 72 hours. It isn't as part of a time-pressured competition in which we're up against other teams. It is in fact the opposite; we are 70 people working together to create one project, our only opponent is the clock.

Before I explain 'why' we are doing this, I'll mention that we've done it twice before as part of major film festivals, once in Galway (Ireland) in 2008, and once in Melbourne (Australia) in 2010. On these previous occasions our motivation was to see whether it could be done, and we proved that it could, getting a place in the audience Top Ten at MIFF for The Ballad of Des and Mo, our second attempt.

So why are we doing it again? Well, it is tempting to just keep repeating the feat as part of international film festivals as some sort of digital dancing bear show. However, we'll leave repetition to Hollywood and see where else this can take us. This time we are not making the film as part of an international festival, but as a stand-alone project, for a few different reasons.

I'm interested in exploring the ways in which the current production model is failing, and then looking to create alternative, sustainable models that address some of those failures. We're experimenting with things like the gender balance both behind and in front of the camera, and offering opportunities for training in a way that the current system has been negating for years. We're also taking the opportunity to explore environmental and economic sustainability, even though globalisation has often put the two at odds with one another. So that is the 'why'.

How are we doing this? Well, the gender balance is simple and it is difficult to see why there isn't a better balance in industry when it is pretty much 50/50 in film schools. Research suggests that social capital, 'who you know not what you know', is a huge factor in this, which is why we're trying to get people working together in one project rather than competing in shorts. It is also why certain groups that try to champion under-represented groups in filmmaking through exclusive festivals or funds are perhaps missing the point. Isn't it about inclusivity in the same market place not an exclusive place within the marketplace?

Training is also quite simple to do, but industry believes that it is costly and ineffective, especially on project-based timelines, when you're better off getting a specialist in to do the work. This is part of the problem with the lack of sustainability, as there is no regular guaranteed employment either for employer or employee, so people don't have the long-sighted luxury of training. When people are training, it is usually to get someone at a cheaper price that 'can learn on the job'. Personally, I believe learning can only take place in a space where failure is acceptable and reflection compulsory. In the 72 Projects we try to create a supportive environment for emerging filmmakers to offer their input, both mental and physical, and be empowered by the sense that we are collectively looking out for one another to achieve a common goal. Failure is fine and acceptable, as long as it is confronted so that everyone can help. Suffering in silence is not cool. It is important to note that making a feature film in 72 hours with one person would be really difficult, and that our whole model is based on true collaboration.

One of the reasons that we are no longer within a film festival is because we were tempted to try using the model to generate momentum in an area where it hasn't already solidified into a scene with a festival. Whereas before, we were arguably preaching to the converted, we are now trying to engage with new audiences to get our message across.

And what exactly is that message? Digital changes everything. The notion that we can carry on making the same films in the same ways, but with digital instead of analogue, is stupid. Digital means that the 'who, how, when, why and where' of filmmaking can all change. It is changing anyway, with a mix of social, economic and technological determinants, but factors of repeatability and sustainability are rarely on the minds of independents or artists. Making a film is still the equivalent of a lottery, in which very few win big, most don't, and the odds are stacked in favour of the house (content aggregators).

We're attempting to use the 72 project in Birmingham to spark a debate around regional production (that doesn't rely on government subsidy or tax breaks, which is ultimately undercutting someone else's business and racing to the bottom) and build a model of sustainability that has progression routes for new entrants, the freedom to fail and better gender representation, as well as other ideals. Sounds pretty unachievable right? Like we are hippies or something? Well, we've built prototypes in Dublin (Ireland) after the first 72 Project that have made four features in three years. The model isn't achieving all these ideals at once but we are engaging in a process of sustainability, and that is now established. Refinements are part of that process.

The film industry doesn’t fund this kind of research, because its doing quite well out of how it works right now. The image of ‘working in Hollywood’ is so alluring that workers are exploited in the hope of ‘making it’. Most academic research into this topic is ethnographic observation of existing film sets or semi-structured interviews with practitioners, all of which refers to industry as it stands. Our action research proposes production models and then tests them, which is unusual because it is EXPENSIVE. But without real world case studies and examples, it is going to be difficult proposing a new model in theory alone. We’re not proposing that all movies be made in 72 hours. Most importantly, we’re proposing that films can be made differently, and we’re shooting them in 72 hours to prove it.

You can find out more about our work at www.the72project.org and support the research at www.bitly.com/the72project.

James Fair is a Senior Lecturer in Film Technology at Staffordshire University. Visit www.bitly.com/the72project to support The 72 Project’s research.