Does a Film Studio Have the Right to Use An Actor's Face on a Box of Merchandise? Read Your Contract! "All Rights" May Include Showing Up on a Box of Flair

On March 28th, 2014 The Hollywood Reporter shared what happened when "Todd Duffey (pictured above), who portrayed the minor character of "Chotchkie's Waiter" in Office Space, sued 20th Century Fox Film over a licensing deal that ushered in an odd piece of merchandise -- a box set called the Office Space Box of Flair, which included a 32-page book and 15 "flair" buttons." 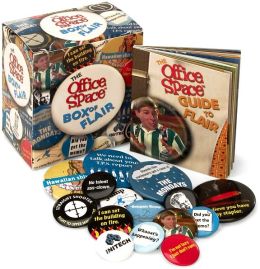 In ruling that Fox didn't need any additional permission from the actor to use his image on a box of film-related merchandise, U.S. District Judge J. Paul Oetken focussed on the express language of the day player agreement that Todd Duffey had signed: "There is only one reasonable way to read the relevant terms: Duffey granted Cubicle all rights to images of his performance in Office Space, including the right to use his image on Office Space merchandise."

The contract that Mr. Duffey signed granted Cubicle "all rights throughout the universe" to Duffey's performance - and, according to Judge Oetken, those rights included the right to plaster pictures of Mr. Duffey as he appeared in the film on merch related to the film.

Does every actor give up the right to control how their image is used on merch that piggy-backs on the success of a film?

It depends on what your contract says.

In this case, Todd Duffey argued that his deal with indie production company, Cubicle - a deal that gave the production company certain rights that could be assigned to a distributor like Fox - did not expressly include the right to use pictures from his performance for commercial purposes. But the Judge was not impressed. In this case, the judge said it wasn't enough to argue that "industry custom requires specific merchandising provisions to convey merchandising rights." If the actor wanted to limit his grant of "all rights," this judge said he should have negotiated that through with Cubicle - and had express language in the contract saying that Mr. Duffy had expressly retained merchandising rights.

Kinda like the deal Jennifer Anniston signed for the same film...

You won't be seeing Jennifer Anniston's face on a box of Office Space flair. At least not without a new deal and additional sums of money changing hands.
Posted by Randy Finch on Saturday, March 29, 2014