Skype meets American Idol meets Peep Show: How YY Has Invented a Whole New Business That Is Generating Major Money for Singers in China (And May Soon Change the Entertainment and Education Businesses Around the Globe?) 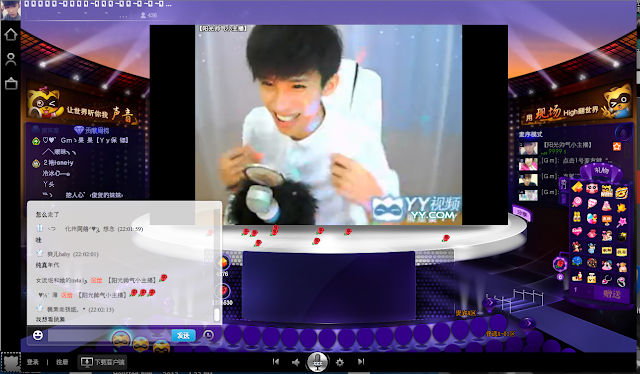 A new 21st century model for entertainment and education is unfolding right now - and very few Westerners know anything about it.

If you're a musician or a teacher in the West you may want to pay attention.

You may also want to pay attention if you're a student who can't afford a college education or someone with a financial interest in the future of brick and mortar public venues from concert halls to classrooms.

Let's start with the music business...

China's YY.com is an online place for music that does not sell downloads.

And unlike YouTube, it doesn't merely slap ads onto user generated videos.

But, since it went public 51 weeks ago (November 20th, 2012), the Chinese social network has seen its NASDAQ traded stock price rise from under $11 USD to over $49 USD at the opening on Nov. 13th, 2013 - in large part because YY has figured out a new way to monetize music online.

As described in a Sept. 5th, 2013 post to The New Yorker by David Goldenberg: "visitors to YY Music can choose from thousands of live performances taking place at any given moment. Each performer has his—or, more often, her—own theatre, in which fans’ avatars cluster in seats around the main stage. A live video feed of the performer rises from the middle. Users can chat with the performer and buy all sorts of virtual gifts for her; their avatars hurl the favors onto the stage."

A popular performer, like Ren Miaoyin pictured below, can earn more than 10,000 yuan ($1,610 USD) from virtual gifts during a performance.

This particular Ren Miaoyin performance (featured in a photo spread in The People's Daily) took place in YY's studio - but most performers work from home - taking online requests, singing and chatting at their own computers- while connected with an audience that can be small or in the tens of thousands.

As David Goldenberg explained in The New Yorker: "Lollipops cost .1 RMB (less than two cents) each; according to [Eric He, YY’s chief financial officer], a souped-up car that a user’s avatar can drive right up to the artist’s stage, in front of anyone who’s watching, can cost more than two thousand five hundred RMB (four hundred and eight dollars)... YY shares the revenue generated from those sales with its performers. For every sixteen-dollar bouquet of virtual roses that a fan throws on stage, the performer keeps about five dollars; YY gets almost all of the rest."

A residential campus, with classrooms where a professor works from behind a podium? That's so 20th century.

What will happen once the world's finest teachers start using tools like YY.com?

Once high quality classes are offered via platforms like YY.com, will the mediocre brick and mortar schools be able to survive?

Already the YY.com platform supports all kinds of interactive meetings - eliminating in many cases the need to travel away from home.

What will happen to the second string and "safety" residential schools - when access to better professors can be had without paying for four years of dorm rooms and lousy cafeteria food?

Conference calls and other types of real-time online group activities utilizing voice, text and video capabilities, are already a big part of YY.com's business. But the educational possibilities - using YY.com to connect in real-time with students all over the world - is where the biggest changes to world culture may be felt.

And this isn't just speculation...

Even though they had other options, a modestly-priced online photoshop class  on YY.com reportedly earned $188,000 USD per month from Chinese students over the course of two years.

And notice, the YY.com photoshop teacher monitored student work and classroom interactions using online tools that actually are an improvement over the the customary Old World methods.

Having spent the last decade in lecture halls - take it from me - there is much that could be improved.

The potential for marrying the technology of YY.com with the idealism and cost-savings associated with MOOCs... somewhere on the planet a second-string college provost is having a nightmare.

The next few years should be an exciting time for anyone who cares about improving the opportunities for students around the world.

Millions of bright kids are currently shut out of higher ed - simply because their families can't afford the Old World model of higher education.

And there are literally hundreds of millions of students who are about to get mobile devices... many of them in places where books were rarely seen.

When that happens... well YY had over 1.56 million listeners on one channel for an online concert in 2012. What will it be like when the best teachers are online for free or for a small fee?

YY.com just might represent the end of the road for many brick and mortar places. From my perspective, this is not entirely a good or entirely a bad thing.  But we need to understand that many of the places where people were accustomed to getting together in the 20th century may soon become irrelevant - replaced by an entirely new platform for live interactions.
Posted by Randy Finch on Wednesday, November 13, 2013