Immersive Entertainment: Fighting Evil For A Good Cause

Make-A-Wish volunteers (and you?) will be turning San Francisco into Gotham City on November 15th so that a five year old boy named Miles (who is currently battling a real-life villain, leukemia) can get his wish - being Batkid.

"The day will begin with a breaking news story. San Francisco’s Police Chief will ask if anyone knows the whereabouts of Batkid. The city needs his help to fight crime and capture villains! Our little Batkid, along with adult Batman, will be ready to answer the call!

After rescuing a damsel-in-distress from the Hyde Street cable-car tracks in Nob Hill, then capturing the Riddler in the act of robbing a downtown vault, Batkid will enjoy lunch at the Burger Bar, near Union Square. After lunch, he will get a special message from the Police Chief and go to the window where he will look down and see a huge crowd of volunteers jumping up and down pleading for Batkid’s help. Why? The villainous Penguin has just kidnapped a famous San Francisco mascot (Lou Seal)! The batmobile will be visible on Union Square, (a convertible offering a view of the crime in progress), and the chase will be on!

After apprehending the Penguin, Batkid will make a final stop at City Hall where the Mayor of San Francisco, Ed Lee, along with the Police Chief, will congratulate him on his daring feats of justice and present him with a key to the city. We hope to have a huge crowd of volunteers and donors there to cheer him on and thank our Batkid!"

If I was anywhere near San Francisco on Friday the 15th, I would want to be part of the crowd cheering this hero on. Here's a link to the schedule of events. We can't all be Batman or Commissioner Gordon or tireless valet Alfred Pennyworth, but (if you're in San Francisco on Nov. 15th and have some free time) you can be a supporting player in this little boy's battle against evil. 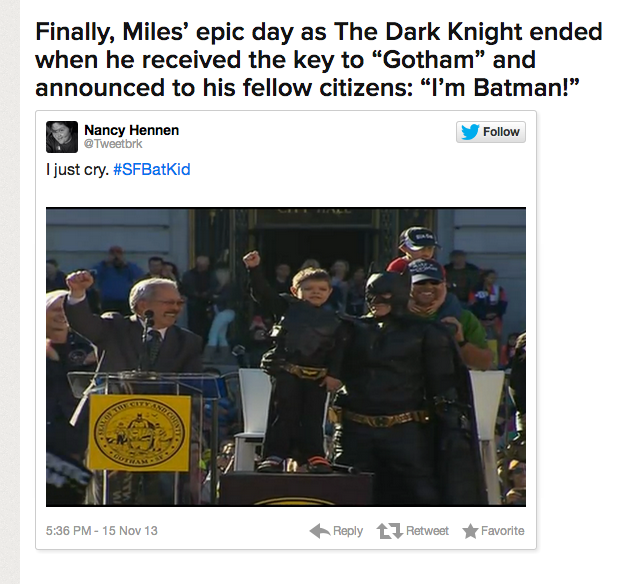