Why CNN Money Is Wrong (The Music Business Isn't "a Disaster!") 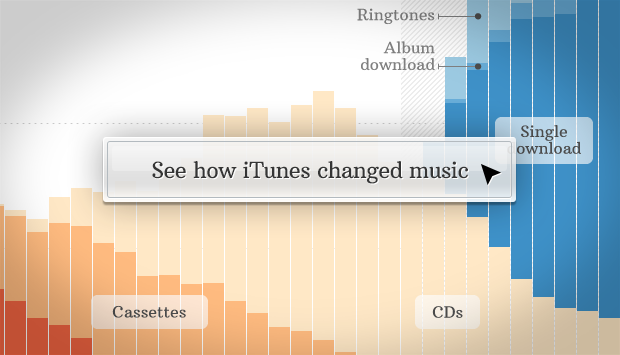 Obviously there are some conspicuous luddites.

We all know an "expert" or two who will just never get how the business works today.

But what about CNN Money?

After all, CNN Money is division of Time Warner.

Shouldn't a division of Time Warner have a good shot at understanding how businesses like Time Warner make money?

But apparently we can't rely on business journalists employed by Time Warner to uncover how companies like Time Warner exist in this New World of content.

Here's a link to the head-slappingly misleading April 25th, 2013 report by CNN Money that claims that digital downloading has been "a source of endless frustration for the music industry."

(Actually, that part, about "frustration for the music industry," in the sense that they've had to learn new ways of making money, is true.  But here's the WTF? part...)

The headline actually claims (without qualification) that "iTunes singles killed the music industry."

Well... CNN Money does have a chart (using data supplied by the RIAA) that claims to show how digital downloads have had "a disastrous impact on overall music revenue." 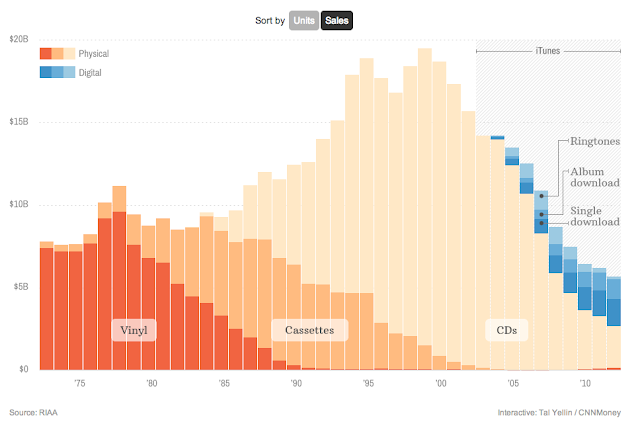 Except of course the chart doesn't show that at all.

The chart isn't for "overall music revenue."  The chart is about a very few ways that recorded music can be monetized.

In other words, CNN Money (at the behest of the RIAA?) has cherry-picked a couple of indicators (e.g., cassette sales, ringtones, etc.) that seem to have gone down since 1998.

Does this prove that the overall business is a disaster?

A chart that claims to represent "overall music revenue" but that shows only the sales from sales of physical media and digital downloads is a bit like (as Brian Eno has noted) a chart showing whale oil sales and revenue from electric lamp rental to prove that electricity had ruined the global market for lighting.

If we're talking about "overall music revenue," what about music device sales?

What about revenue from live music?

What about music licensors (e.g., even though no longer owned by Time Warner, Warner Music Group is just one of the companies reporting profits from licensing content)?

The chart (above) only shows total revenue from recorded music. NOT profit.

And profits can go up. even when revenue comes down!

For example, since it costs a lot to make, store, ship and sell physical copies - and much less to distribute digital copies, the chart above might tend to be just be a bit (wildly?) misleading as a source of information about how much money the record companies are actually keeping at the end of the day.

The business of recorded music has changed.

As the chart above shows, it used to be a business that struggled to accumulate $10B in revenue when the revenue was driven by selling vinyl and cassettes (before CDs, back around 1978).

These days, the biggest music company in the world, Apple, (selling digital downloads of music to improve its device proposition) made $6.9B in profit in the last reported 3 month period.

Not all (some?) of Apple's profit can be attributed to the fact that Apple sells devices that are great ways for listening to music. But notice the paradigm shift. The percentage of revenue that flows to Apple from music sales is small compared to what Apple makes from selling devices that play music. At the end of 2011 (where the CNN Money chart stops) Apple was making around $1B a week from selling devices that play music. $1B a week in profit. Not revenue.

Oddly the CNN Money chart simply ignores the sale of devices that play music (where Apple and many other companies have found huge profits in music for many years now).

So, is the music industry a "disaster?"

Only if you exclude all the new ways that music is being monetized and focus exclusively on Old World measures - ignoring just how profitable music has become for some new (and old) players.

Could CNN Money have figured this out?  Did the RIAA intentionally mislead CNN?

What if - instead of listening to a lobbying group for the recorded music business - CNN Money had asked their parent company about the profitability of digital downloads for music and films?

In a recent conversation with investors, as described in Variety on Sept. 6th,  2013, "Time Warner disclosed that HD EST [the electronic sell through window where fans can buy a download of a new movie, often before it is available on DVD] contributed $17.50 per transaction [to Time Warner's bottom line] — $14 more than what VOD gets, and $16 more than SVOD."

Let that sink in.

Time Warner says they are making $17.50 per transaction for a form of digital download.

How much did Time Warner make per copy on physical media (like DVDs and CDs) in the old days?

UPDATE October 5th, 2013  An article in TechDirt includes recent research from the London School of Economics supporting my view that the music industry is actually generating more revenue than ever - although this revenue is being distributed in new ways.