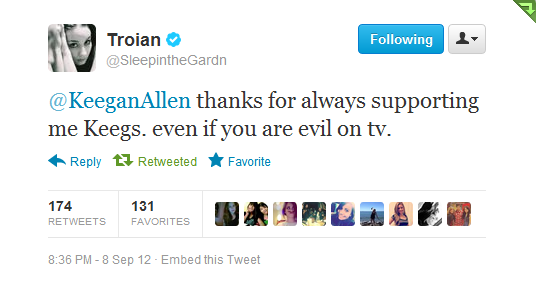 "ABC Family [producers of 'Pretty Little Liars,' the most tweeted show with nearly 11 million mentions on Twitter in the first half of 2013] credits its comprehensive social media strategy for its high numbers, a program the network refers to as "Responsive Marketing." And it compares re-tweets to the modern day version of an autograph.

"Marketing is no longer a monologue -- it’s a dialogue that allows us to connect with viewers in a way that enhances fan engagement and builds lasting loyalty," Danielle Mullin, vice president of marketing at ABC Family told TheWrap."

According to TheWrap "SocialGuide [the data analysis service used by ABC Family for 'Pretty Little Liars'] collects tweets based on a match to its database of all terms associated with a TV show. That includes things like the name of the program, the names of the actors, the hashtags and handles for the actors and program, key quotes or thematic elements (eg, #TeamEdward or the like), essentially any way that a person might be talking about a TV show on Twitter."

TheWrap also notes that, for American Idol, "Fox also has a war room full of people live-tweeting shows every Wednesday and Thursday, conversing with fans and even creating original memes in real-time."

"'Scandal' has also achieved great success -- and possibly even a second season -- because of social media. The political potboiler is the seventh most-tweeted show of 2013, with 3.5 million over the first six months of '13. The series takes cast involvement to a whole other level. The entire cast live tweets every episode of the show -- both first runs and repeats, Marla Provencio, executive vice president and chief marketing officer ABC Entertainment Group, told TheWrap. "Our show was sort of, like, a grassroots movement," "Scandal" star Kerry Washington... told TheWrap. "It was from the bottom up." Fans of "Scandal" are so fervent that they actually call themselves "gladiators" because they are committed to championing the cause of the show."
Posted by Randy Finch on Friday, August 09, 2013