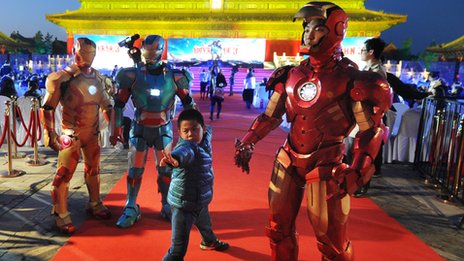 As many readers are aware, the film business in mainland China - especially the market for films in theaters - is proving to be a disappointment to Western producers in 2013 - even while Chinese box office grows in unprecedented ways (in sharp contrast to the declining US film box office so far this summer).

In short, while the summer of 2013 is causing many Hollywood executives to reconsider their career choices - China's local film business is booming.

And the explosive growth of box office in China in the first half of 2013 is not a one-time-only anomaly.

The Chinese theatrical film business has been growing at an unprecedented rate for several years now - as new theaters have opened in second, third and even fourth tier cities and customers with disposable income throng to these new screens: Theatrical revenue has increased at a year-on-year rate of around 30% in China since before 2010.

The pattern of explosive growth - China's total box office revenue continues to grow even as Hollywood's numbers are flat or falling - has made even conservative investors very keen on China's booming film production business.

And what's most noteworthy about the 2013 numbers coming out of China is the shift in the origins of the movies that are earning top dollars.

As reported in the July 10th by The Hollywood Reporter, China is proving to be a very difficult environment for Hollywood films in 2013 - even as the Chinese theatrical numbers continue to grow...

Even the most jaded observers have been stunned by the way that no-frills films with Chinese stars have caught fire in 2013. And the poor showing of Hollywood films in China has been deeply vexing to Hollywood types - who thought they might find new opportunities in the East.

We may be nearing the end of the theater building frenzy in China. (A bubble, fueled in part by easy access to building loans?) All good things come to an end.  But now that over 13,000 modern movie theaters exist in China (the number of movie screens doubled from 2007 to 2011 - with sparkling new multiplex screens opening at an astounding pace during the boom times) and Chinese audiences are thronging to theaters - Hollywood needs to figure out how to reach an audience that is not that excited by this year's blockbusters.  Could it be that Chinese movie-goers are older and more sophisticated than the typical US movie-goer? The box office numbers in 2013 suggest that the Chinese movie theater audience is ready to accept modest local films about the experiences of young adults - even when a Hollywood 3D blockbuster is playing in a theater just next door.

Perhaps the best example of the way that local Chinese films can stand up to Hollywood heavyweights on the mainland is the saga of Iron Man 3 - a Hollywood film made with a serious infusion of Chinese money from DMG Entertainment...

Even though Iron Man 3 set an opening day record in China, the numbers might have even been better for Iron Man if the director of a competing Chinese-made film, Vicky Zhao of So Young, hadn't convinced SARFT to delay the opening of Iron Man 3 until her local (college girls coming-of-age) film had a clear shot (a five day head start) at the Labor Day / May Day holiday weekend. While there's no official confirmation of the rumor that Vicky Zhao actually went to the SARFT offices and wept until she got her way, the Chinese agency that is responsible for allocating theaters did give her modestly-budgeted film a favored opening slot. Iron Man 3 didn't open until May 1 - even though it was ready to go - and had been announced for April 26th. And the holiday audiences in China were offered So Young starting on April 26th, 2013.

Then, after So Young and Iron Man 3 had competed head-to-head for several weeks, another Chinese film, ironically entitled American Dreams (another coming-of-age film about ambitious young men), opened and promptly grabbed the top spot... thanks in part to a generous allocation of available screens by SARFT...

"According to figures made available on the Chinese-language Dianyingpiaofang (“Film Box Office”) portal, American Dreams is slated to take up nearly 37 percent of the 24,000 shows across the country, compared to 17 percent for Iron Man 3, 14.2 percent for So Young, 13.7 percent for Oblivion and 9.5 percent for The Croods."
Posted by Randy Finch on Tuesday, August 06, 2013