The Independent’s Guide to Film Exhibition and Delivery 2013 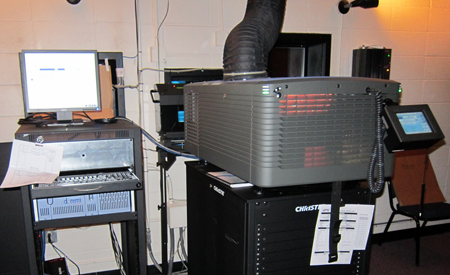 A January 7th, 2013 post to the film collaborative blog by Jeffrey Winter describes how "2012 was the year it became clear that the delivery and exhibition formats we’ve been relying on for the last few years (especially HDCAMs) are no longer sufficient, and that in order to keep pace with the marketplace, we must now embrace the next round of digital evolution."

If they're pursuing a theatrical release of any kind, indie filmmakers need to become familiar with the technologies that they will encounter in the projection booth. To start, filmmakers in 2013 must understand the expense and requirements of Digital Cinema Package (DCP) - "a collection of digital files used to store and convey digital cinema audio, image, and data streams."

In many cases, you can't rely on older formats - due in part to the unacceptably high failure rate of Blu-Ray discs - "not a professional product" - when used in theatrical settings.

So how do indie filmmakers proceed?

"[F]ilm festivals around the globe are in hyper-drive to convert to DCP as their preferred or even exclusive format. Going into the film festival circuit in 2013 and forward in any mainstream/meaningful way without a DCP… especially for narrative features… will be challenging to say the least (although likely still doable if you are willing to forfeit some bookings and some quality controls). But if you aren’t sure yet if your film will actually command significant public exhibition at major festivals and theatrical venues, you probably shouldn’t dive into the pool just yet."

"In 2013, the needs of your exhibition formats and delivery formats will likely be determined by how successful your film turns out to be. If your film turns out to be truly theatrical, you will likely need a combination of DCPs and HDCAMs and BluRays to meet the demands. But if your film turns out to have limited public exhibition applications, then perhaps a mix of BluRays, DVDs, and digital files may be all you need. Rather than make those decisions in advance, we recommend you pursue a delivery strategy that lets the marketplace make those decisions for you."
Posted by Randy Finch on Tuesday, January 08, 2013