Film as Software: Mark Harris Discusses the Art and Commerce of Releasing a Film That Can Change in Response to the Audience 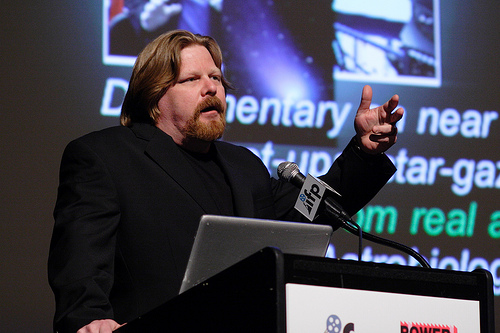 In a December 23rd, 2012 post to Filmmaker Magazine's Website, filmmaker and software architect Mark Harris discusses his feature film, The Lost Children, that will have its premiere in January 2013 at Lincoln Center in New York.

FSLC is promoting the premiere of The Lost Children NOT as a film event, but as the NYC premiere of a story world. That's because Mark Harris's work includes a live immersive theater experience, a live lecture and Q&A about the science that supports the film's story (e.g., a cult in the film believes they are from another world and soon will leave Earth by way of a UFO), and an interactive screening of the feature film itself.

What's interactive about the film screening?

Mark Harris explains:" "The audience will be allowed to to indicate their feelings in a very non-disruptive manner, and the film will alter itself in reaction. Those who want to just watch a film will be able to do that uninterrupted. But the film they see will be only one variation possible. I’m toying with the ideas of releasing each version of the film when we do VOD. The goal is to experiment with a concept called “film as software.” Which means basically film taking on some of the characteristics of software, one of those being the ability to react to users in real time. I want to emphasize, this will not be a “choose your own adventure,” and it will not be an incoherent dive into video art. As I said, those who want to just sit back and watch a (hopefully) good movie, can do so. I think this principle of not forcing people to “interact” is key in designing any interactive experience and it’s a principle I extend through the entire evening. There are always multiple levels and you can choose the one that suits you best."

In his blogpost, Mark Harris also addresses a key question: "Can money be made on this?" Mark's entire answer to the money question is well-worth reading. But one piece of his where's-the-revenue-model discussion bears repeating here, as it suggests that Mark Harris's paradigm-shattering way of thinking isn't limited to his storytelling alone: "I like writing software. I like making movies. I like designing live experiences and writing plays. So I am less concerned with each project earning profit, than I am with my career as a whole. Indeed this is nothing new to independent filmmakers, whose first big success may mean more to their careers than to the actual return to their investors."

UPDATE: January 3rd, 2012 Mark Harris has published the second part of his post about The Lost Children. His insights into non-linear exposition, the role of the protagonist, "priming the audience," and how theater and physical objects fit into this new world of storytelling, are invaluable.
Posted by Randy Finch on Monday, December 24, 2012